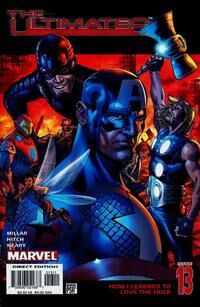 Appearing in "How I Learned to Love the Hulk"Edit

Synopsis for "How I Learned to Love the Hulk"Edit

Banner is dropping hundreds of feet from the air, in hopes to turn into the Hulk. Cap orders the soldiers to fall back, as their Weapon of last resort is about to be dispatched. Banner screams, and he smashes into a warehouse, creating a huge explosion. Out comes the Hulk. Cap tells Nick to get out of the area, as Hulk charges in. Kleiser is again alive, and prepares to attack Cap, but Hulk gets to Cap first. Hulk gets ready to kill Cap, remembering that Cap previously kicked Banner in the head. Cap tells Hulk that the "naked guy" (Kleiser) was cheating on Hulk with Betty while Banner was in isolation. Hulk throws Cap away, and attacks Kleiser. Hulk throws Kleiser at a truck, and Kleiser picks it up, throws it into Hulk's face, but only in makiung Hulk even angrier.

Wasp and Black Widow are wondering what to do about the bomb, when the Black Widow comes up with the idea that Iron Man, the smartest man on Earth, must know what to do. Wasp calls Iron Man, but Iron Man says he can't help, because he and Thor are the only ones helping with the air support. However, the Air-Force arrives along with a fleet of SHIELD Helicarriers, providing the needed air support.

Hulk is punching Kleiser down, beating him senseless. Kleiser gets beaten until his camouflage is gone, and his alien self is shown. Kleiser gets ready to congratulate Hulk, when Hulk tells him to "shut up" and rips his head off. Cap and Fury go into a helicopter, and fly over Hulk, who is eating Kleiser's remains. Cap tells Hulk that the alien spacecrafts told Cap that they think the Hulk is 'sissy'. Hulk goes crazy, and attacks the Chitauri ships.

Iron Man doesn't know what to do either about the bomb, so he gets Thor to send the bomb to another dimension. Thor comes in, and smashes his hammer into the bomb, creating a blast of electricity. Everything is dark and raining, as Thor comes back and explains that he sent the bomb to the dimension homed by his enemy Fafnir the Dragon. A ripple is felt from the bomb's blast.

Meanwhile, Hulk is still destroying everything. Hawkeye is in the air, getting ready to shoot the antidote into the Hulk. While Hulk is running, he destroys an American helicopter. Hawkeye comes in with another helicopter, and gets ready to shoot. He shoots the Hulk, but the Hulk doesn't stop. As the Hulk jumps into Hawkeye's position, Hawkeye closes his eyes in fear of being eaten. Banner lands into Hawkeye, unconscious. With all the Chitauri dead, the heroes and the army celebrate. Banner is again in isolation, having to remember the Hulk eating Kleiser. Now that the Ultimates are world-famous heroes, and everything is back to normal, except that Kleiser might come back if he heals again from Banner's digested food, everyone gets ready for a party at the White House. Hank Pym finally gets the courage to call Janet, but Janet hangs up on him. At the party, Steve and Janet are dancing, and the two finally kiss. Fury watches, stating: "Well, ain't that nice? I thought that guy was never gonna get some." Fury then goes into the Oval office, telling the guards to pour a glass of champagne for themselves, "Ain't every day we save the world."

The story continues set one year later in Ultimates 2

Retrieved from "https://heykidscomics.fandom.com/wiki/Ultimates_Vol_1_13?oldid=1462483"
Community content is available under CC-BY-SA unless otherwise noted.