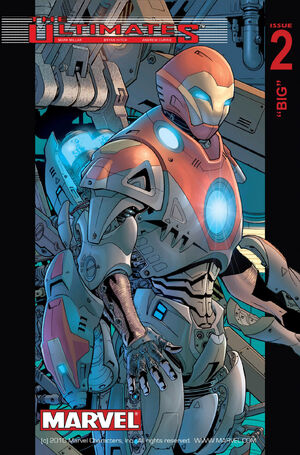 Man, heading S.H.I.E.L.D. is like being the Pope, the Queen and the President of the United States all rolled into one, Doctor Banner.

While Bruce Banner and Nick Fury have dinner, Banner says he has not had a trace of any Hulk cells for the past three months. Agent Fury tells Banner that the president is funding his Super Soldier program with fifty billion dollars. Nick also says that, due to the rise in super-crime, S.H.I.E.L.D. is working on creating a Superhuman Unit for dealing with 21st century problems.

Meanwhile at the Super-Soldier Research Facility, Hank Pym shows Janet Pym how he is using ants to help him move out of the building and make coffee.

Iron Man tests his armor by flying over the streets of the streets of Manhattan. After the test run, Tony Stark talks with Nick Fury about his new superhuman team, and Tony agrees to join the team.

Banner moves to a new super soldier research facility in Manhattan, where he witnesses Henry Pym using Pym Particles to make himself grow to the size of sixty feet at most. Bruce Banner starts to get Hulk flashbacks, as he is stressed to the end of the rope, until Nick Fury tells him that they found Steve Rogers.

Retrieved from "https://heykidscomics.fandom.com/wiki/Ultimates_Vol_1_2?oldid=1462472"
Community content is available under CC-BY-SA unless otherwise noted.