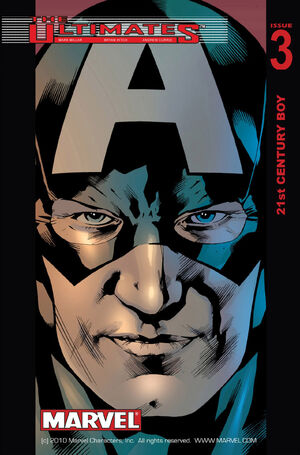 As Hank Pym tries out his new Giant Man suit, his wife, Janet, comes over to give him the spectacular news: Steve Rogers is alive. As Rogers is confused where and when he is, Nick Fury gives him the news that he has been out for 57 years. Cap takes this in a non-shocking way, by attacking Fury, breaking his nose, and escaping the S.H.I.E.L.D. facility.

Giant Man enters and stops Cap before the super-soldier can escape. Later, Cap is now aware Fury was not lying to him, and Cap goes to see his old friends. He discovers his old, ex-fiancee Gail Richards, is now retired and is married to his old friend, Bucky. Cap and Nick then go to a cemetery, where Cap has Nick tell him what happened to all his relatives. Cap laments that everything he ever loved is dead, but Fury points out that there is still one thing left... America. At the new Triskelion, the world finally sees The Ultimates assembled as one, plus the first modern appearance of Captain America.

Retrieved from "https://heykidscomics.fandom.com/wiki/Ultimates_Vol_1_3?oldid=1565318"
Community content is available under CC-BY-SA unless otherwise noted.