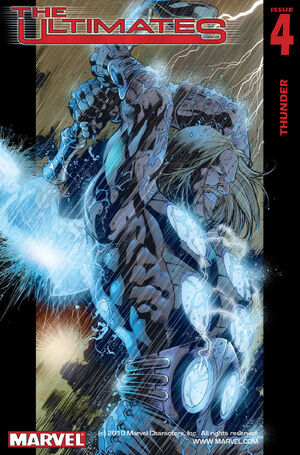 Why, Mister Samuel L. Jackson, of course. That's not even open to debate, Doctor Pym.

For her birthday, actress Elizabeth Shannon goes on a scheduled shuttle launch with Tony Stark. Media personality Larry interviews Tony and asks him how he can justify forming a team of superheroes when there has only been one super-villain attack on the United States so far. Tony compares the situation to buying insurance.

In New York, Janet Pym helps Steve Rogers adjust to the new world as they go shopping. However, when they visit Rogers' old apartment, they find it has been heavily vandalized.

At the Triskelion, the news media covers Giant Man while Betty Ross and Bruce Banner discuss issues with their developing team and gaining new recruits. Nick Fury and Bruce Banner try to recruit the delusional Thor, but he shows no interest in joining a team which would fight to preserve "a corrupt status quo." Realizing they are wasting their time, Fury and Banner leave.

Weeks pass, and the Ultimates have a conversation about who would play whom in a hypothetical Ultimates movie, Banner loses it when Hank Pym insults him once again just like everyone else. Banner takes the Super-Soldier serum, injects it into himself and turns into the Hulk.

Retrieved from "https://heykidscomics.fandom.com/wiki/Ultimates_Vol_1_4?oldid=1512395"
Community content is available under CC-BY-SA unless otherwise noted.