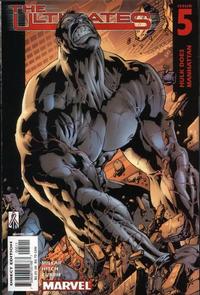 Your jaw is broken, your ribs are cracked and one of your lungs has just been punctured, Banner. Have you tasted enough of Mjolnir yet?

Appearing in "Hulk Does Manhattan"Edit

Synopsis for "Hulk Does Manhattan"Edit

After injecting the Super-Soldier serum into his veins, Bruce Banner turned into the Hulk, but not like the original Hulk. This Hulk is stronger, angrier, hungrier, and hornier than before. The Ultimates set out to find and stop Hulk, and Nick Fury says Thor will only help if the President doubles the international aid budget. As Hulk searches for his ex-girlfriend, Betty and her date Freddie Prinze, Jr., Giant Man comes in and stops Hulk by covering him up with his huge hand. Hulk easily escapes, smashing Giant Man into a building, and prepares to decapitate Giant Man and use his head as a toilet bowl.

Iron Man enters, throwing Hulk off Giant Man, and bring Hulk to the recently deserted Grand Central Station, where the two battle, leading with Iron Man having to scramble Hulk's thoughts. Iron Man uses his remaining power to blast Hulk to the streets, where Fury orders Wasp to bring Hulk to a specific street, where Cap is waiting. Wasp gets Hulk's attention by flashing him, and Hulk follows Wasp to where Cap's tank drops on Hulk. Cap turns around, as Hulk breaks into the tank, and a battle ensues.

Cap easily beats down the Hulk, preparing to inject a serum that will calm the Hulk down, but Hulk gets up, breaks the serum's needle, and prepares to beat down Cap. Rain pours down, as a huge bolt of lightning throws Hulk blocks away. Suddenly, Nick receives word that the president has actually doubled the international aid budget. Hulk starts to get up, when Thor smashes him down three times, but that does not work either.

Hulk throws Thor down a few streets, only leading to Cap's next plan, which is to use Betty as bait to get him out of the city. Hulk jumps toward Betty, who is flying off in a helicopter, and lands on the chopper. Unaware to the Hulk, Wasp is inside of his head, and uses a sting ray on his brain to calm him down and end the Hulk. Out of the dust comes Banner, who is sitting naked and helpless. Cap comes over, first, offering help, instead kicking Banner in the head.

Retrieved from "https://heykidscomics.fandom.com/wiki/Ultimates_Vol_1_5?oldid=1462475"
Community content is available under CC-BY-SA unless otherwise noted.