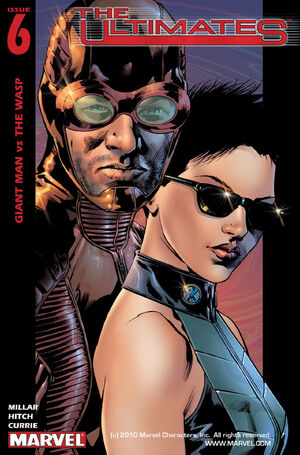 How am I feeling? Well, my ribs are cracked, my nose is broken and my left arm seems to have been dislocated, but it's nothing which shouldn't fix itself up in a day or two, ma'am.

Appearing in "Giant Man vs. the Wasp"Edit

Synopsis for "Giant Man vs. the Wasp"Edit

After the 'Hulk incident' in Manhattan, everyone is trying to get things back to normal. Betty Ross tells Nick Fury that she feels a tad responsible for what happened, since it was almost all her fault as she was the one who was always mean to Banner. Betty has the press hush up the Hulk's connection to Bruce Banner, and the Ultimates gain popularity.

Thor has finally joined the team, and Steve, Tony, and Thor have dinner. On the other side, Janet and Hank were supposed to go out for dinner, but an argument occurs, and what crosses the line for Hank is when Janet insults Hank that he was not smart and that even Banner was a better man than he was. Hank answers this physically and hits Janet, who fights back.

Meanwhile, Thor tells Tony and Steve why he is here; he is a God in a man's body, and is here to 'purify' the world before modern technology bleeds it dry. He rejects full membership on the Ultimates, but promises he will help them if lives are really at stake. Tony gives Steve his old helmet from World War II. They then change the subject to why Tony is being a hero. Tony says he has a tumor in his brain and has only a few months to live. At the end of the meal, the three heroes give a toast to Hank, Janet, and Bruce Banner.

Hank and Janet continue fighting. Janet shrinks to Wasp size to evade her husband. However, Hank grabs bug-spray, and sprays Janet, who hides under a desk. Not to be defeated, Hank puts on his Ant-Man helmet and engulfs his wife in ants. Soon, Hank sits on the floor, realizing what he has just done..

Retrieved from "https://heykidscomics.fandom.com/wiki/Ultimates_Vol_1_6?oldid=1462476"
Community content is available under CC-BY-SA unless otherwise noted.