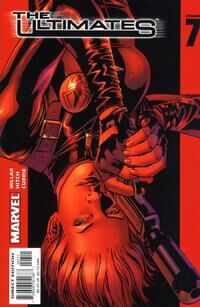 "Yes, he's hit her before. Back when we were sharing a room together, he got drunk after failing some physics paper and put her head though the bathroom door.

Hundreds are dead after the 'Hulk incident', and Janet Pym is in the hospital after getting sprayed by bug-spray and stampeded by hundreds of ants controlled by her husband, Hank. Bruce Banner is in isolation, so depressed by what he did, but no one even knows Banner is the Hulk. A doctor tells Banner that the Hulk cells are not leaving, and never will. Cap is greeted by Gail and Bucky Barnes, after the memorial service. Now that all the Ultimates know that Hank did it, Cap is in a rage, since he has feelings for Janet. Fury is calling on Natasha Romanov and Clint Barton to complete a mission. Cap calls a transport to Hank's location.

Retrieved from "https://heykidscomics.fandom.com/wiki/Ultimates_Vol_1_7?oldid=1462477"
Community content is available under CC-BY-SA unless otherwise noted.