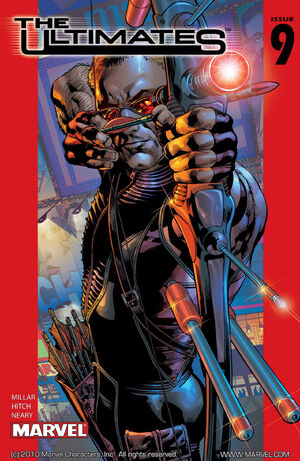 You think you're a tough guy, huh? You like slapping people around? Well, let's see you take a shot at me, mister! Let's see you pick on someone your own size!

Captain America has just tracked down Hank Pym, and is with him, to teach him a lesson after Hank beat up his wife. Cap goes with the physical route, hitting Hank in places not too severe, but to make Hank need to increase his size. After Hank, having been hit numerous times, finally increases his size, Cap has a little fun. First, Cap goes to a higher floor to get a higher jump on Hank, and literally jumps on Hank's face, and pulls his head down, smashing it into a construction site. Hank tries to fight back, but Cap is too fast, dodging every swing by Hank. Cap finishes the job by dropping massive bars on Hank. S.H.I.E.L.D. came right after to clean the mess.

Back at the Triskelion, Bruce Banner, who hates Hank Pym because Pym previously stole Banner's job, is now happy to hear that Cap broke Hank's jaw. Betty, who is now with Bruce more than before, is telling Bruce about the possible upcoming alien invasion. The Chitauri have spent decades infiltrating Earth, and have been subversively planning a gradual "stealth invasion" ranging from sabotaging nuclear programs and (bizarrely) having children implanted with microchips. Banner questions how SHIELD is going to fight back. Betty explains that based on SHIELD's psychics they have examined the dead brain tissues of Chitauris leading to a "big push" that is planned for Micronesia. Importantly Micronesia possesses a hidden base containing a large number of alien soldiers and a wide selection of doomsday weapons, which means Nick Fury plans on invading Micronesia with a large invasion force. Amusingly, Banner explains that since the Chitauri's last invasion attempt in World War Two there were fifty or sixty of the aliens that remained on Earth. He then asks how there are more of them in to the present. Betty smugly reply that they have spent time reproducing.

Cap goes to Wasp's hospital room to see her, but Wasp is furious at Cap for what he did to Hank, even if Hank abused her. Wasp tells Cap to leave. Later, Nick gets his team together, and they head for Micronesia, a place rumored to be the alien's base.

Retrieved from "https://heykidscomics.fandom.com/wiki/Ultimates_Vol_1_9?oldid=1462479"
Community content is available under CC-BY-SA unless otherwise noted.