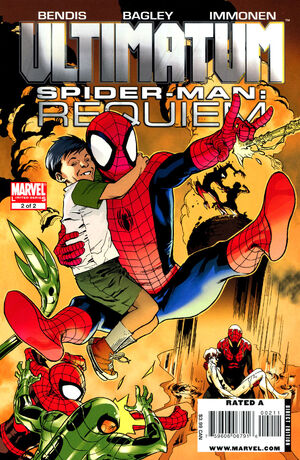 As Jameson writes the article that has become Spider-Man's obituary, he begins to reflect on the hero's past exploits, remembering another incident in which Spider-Man first confronted the Hulk...

During class at Midtown High, Peter Parker and the other students are told to be evacuate. Once outside Peter, Mary Jane and the other students witness the military fighting against the Hulk. Peter changes into Spider-Man and strafes with the Hulk across New York City as the military continues to attack the Hulk. The fight intervals when the Hulk throws a tank at a bridge, causing a school bus full of children to tether on the edge. Spider-Man attempts to keep it falling until surprisingly, the Hulk helps him and save everyone. Following this, the Hulk sadly pauses as Spider-Man ushered the driver and the children to leave safely. Due to his conscience actions The Hulk changes back into scientist Bruce Banner, which Spider-Man recognize him. When Bruce is questioned by Spider-Man as to how and what cause everything that happened, he profess that since he became the Hulk the military were the first to attack him because of what he became and for being different. Spider-Man then reason that by talking to the military, but is turned down as that reasoning with them won't mean anything given a world that its fearful and prejudiced. The military finally surrounded Bruce and demands his surrender. Spider-Man defends Bruce, but for him to turn into the Hulk as he leaps to his escape. The military leaves as Spider-Man criticize the commander for attacking the Hulk despite for what he had done to save the children.

In the present Jonah admits that since the incident between Spider-Man and the Hulk, he consistently misrepresented Spider-Man as a villain, rather than a hero. Jonah continues to type to clarify his misrepresentation to the readers. Meanwhile, Captain America, Iron Man and the military are searching for survivors in the ruins of New York City. They then find a maskless Spider-Man in the rubble. In the last panel, Spider-Man opens one of his eyes, signifying that he is still alive.

Retrieved from "https://heykidscomics.fandom.com/wiki/Ultimatum:_Spider-Man_Requiem_Vol_1_2?oldid=1462500"
Community content is available under CC-BY-SA unless otherwise noted.