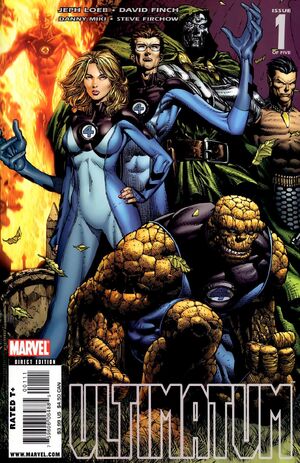 Yes. Bring them, Charles. Bring everyone. So I can tell them myself. For what they've done... they will have to pay the ultimate price!

Throughout Manhattan, the heroes of the world continue with their day-to-day affairs. Iron Man and Captain America discuss the future of the Ultimates. Reed Richards prepares to propose to Sue Storm. Johnny Storm argues with his father. The X-Men take a walk down 42nd Street and Peter Parker and his friends take a ride on the El.

Without warning, the sky darkens and giant flashes of lightning explode across the sky. Torrential rain hammers down upon the city and within minutes, all of Manhattan is being flooded. The water levels rise so high that they engulf the first several floors of most of the city's skyscrapers. A drowning Bruce Banner transforms into the Hulk and rises above the water line where he sees one of the Watcher units growing in the middle of the street. Peter Parker changes into Spider-Man and hits the high ground, though he has no idea what he will be able to do in such a situation. Angel dives through the water and scoops up Alison Blaire who has swallowed too much water. He is too late to save her however. Franklin Storm is killed and Johnny Storm is missing in action. Iron Man grabs Captain America and takes to the sky. Yellowjacket grows to more than sixty-feet tall and tries to find his wife, Janet. Reed and Sue go to the top of the Baxter Building where Sue tries to hold the sea water back with a massive force field. The effort proves too much for her however and she collapses. Reed immediately suspects the Sub-Mariner is responsible for the flood and flies into a rage when he sees the Mariner's sea-craft floating in the water. He begins fighting Namor, but the Sub-Mariner assures him that he would never do anything that would put Susan's life at risk.

This ecological disaster is not limited to New York though. In Latveria, Victor van Damme finds that the entire area surrounding his castle is covered in snow and ice. Pedestrians are frozen solid, standing in the middle of the street.

At Xavier's Acadmey, Professor X experiences a psychic flash. He knows who is responsible for this disaster. He telepathically alerts the other X-Men and warns them that Magneto has activated his own Doomsday weapon.

Aboard his floating headquarters, Magneto seethes as he observes his handiwork. He wants revenge for the deaths of his children Wanda and Pietro, and he is determined to make sure that every man, woman and child pays the price.