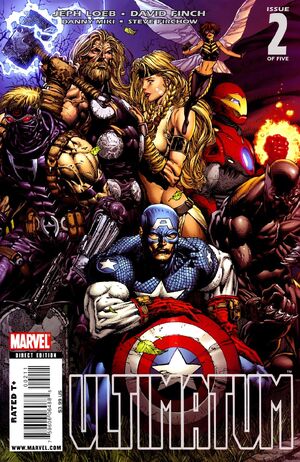 It was Magneto. He's offset the magnetic poles, creating this ecological nightmare.

The flood waters begin to subside, but New York is still in ruins. Various heroes labor to save as many people as they can. Spider-Man helps to rescue a pedestrian who is trapped in her car and receives an unexpected assist from the Hulk. Yellowjacket searches desperately for his missing wife, the Wasp. Iron Man finds the drowned body of Captain America and races back to the Triskelion in the hopes of resuscitating him. S.H.I.E.L.D. director Carol Danvers offers him any assistance she can provide, but things look grim.

Hawkeye appears in the ruins of one of the skyscrapers and offers to help Yellowjacket in his search for the Wasp. Yellowjacket doesn't want his help, but Hawkeye understands the torment of losing a spouse and insists on helping him. Yellowjacket reluctantly agrees.

At the Baxter Building, the Thing keeps vigil over Susan Storm, the Invisible Girl, who was put into a coma after trying to stave off the tidal wave that destroyed New York. She begins subconsciously using her powers, and the Thing is thrown through the window of the building.

Reed Richards meanwhile, captures the Sub-Mariner. He is certain that Namor is in some way responsible for the attack on New York. Doctor Doom arrives and tells them that Eastern Europe has likewise been affected and is now a frozen tundra. Accompanying him is Princess Power, a member of the Squadron Supreme from another dimension. Having seen her own world suffer massive devastation, she offers to help the heroes of this reality in any way she can.

At the Statue of Liberty, Thor finds the dead body of his lover Valkyrie. He is overcome with grief and brings her corpse to the realm of Hela, the Asgardian sorceress. He asks Hela's aid in resurrecting Valkyrie, but Hela decides that in order to prove himself worthy of such a gift, he must first fight through her army of fallen warriors. Thor takes to the task with great passion, but finds himself assisted by an extremely unlikely comrade - Captain America.

Back in New York, Hawkeye comes upon a horrifying sight. In the ruins of one of the buildings, he finds an insane individual (who appears to be the Blob) eating Janet van Dyne, aka, the Wasp.

Meanwhile, Magneto decides to pay a visit to his old colleague, Professor Charles Xavier. Xavier is alone in his school and he openly declares war against Magneto. He tells him that he will personally lead the charge against him. Magneto has decreed that humanity is no longer worthy of the lives they have led. He is also tired of Xavier's constant interference in his plans. Grabbing him by the head, Magneto snaps Xavier's neck.

Retrieved from "https://heykidscomics.fandom.com/wiki/Ultimatum_Vol_1_2?oldid=1510813"
Community content is available under CC-BY-SA unless otherwise noted.