Part of the 'Ultimatum' event 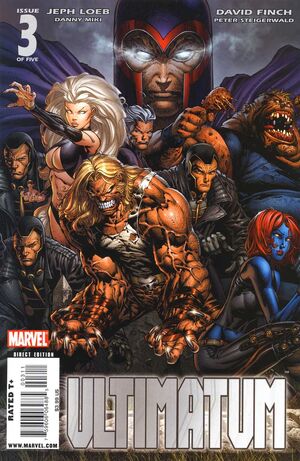 After the great flood, God spared only Noah and his family. He did so because he knew they'd be loyal. They were the last of mankind. Now, I will choose who lives and dies. Those that remain will be grateful. For they will find themselves in... heaven on Earth.

Appearing in "Heaven On Earth"Edit

Synopsis for "Heaven On Earth"Edit

Altering her appearance to imitate Magneto's daughter the Scarlet Witch, Mystique taunts Magneto about destroying the world for his "little girl". Magneto grabs her by the throat and tells her to stop and that he has plans for her. Some of the mutants have begun turning on Magneto for killing other mutants, seen as turning on his own people. One of Madrox's bodies argues with Magneto, the Master of Magnetism swiftly kills him with Mjolnir.

Back in Manhattan, Hank finds the Blob eating what's left of Janet, and kills him by biting his head off while giant sized, and spitting it out onto the street. Hank then picks up Janet's remains and heads back to the Triskelion. The X-Men are also mourning their dead, and Angel swears he's going to kill Magneto for what he's done. Jean tries to reach out to the professor and finds that he is also dead. She tells the other X-Men this sad news.

In Valhalla, Cap and Thor are fighting Hela's legions of the dead, when Hela presents Thor with an option, his love can be returned to life, but one of them must stay behind to take her place. Back at the Triskelion, Hank tells Iron Man to get Janet's body inside and there's an encrypted file marked "The Jocasta Project" that will fix everything. He then grabs all the Multiple Men and takes them out to the water, where the bombs kill him as well as all the duplicates. Valkyrie and Cap both wake up. Thor has remained in Valhalla and returned Captain America. When the Ultimates gather together, Captain America tells they will find every hero available, and save the world.

Retrieved from "https://heykidscomics.fandom.com/wiki/Ultimatum_Vol_1_3?oldid=1462486"
Community content is available under CC-BY-SA unless otherwise noted.