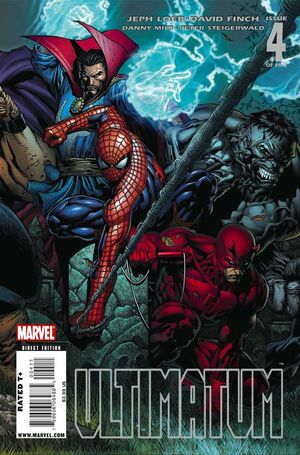 I had Magneto's daughter - the Scarlet Witch - murdered. I knew Magneto would then declare war on mankind and when it was over... I would be there to pick up the pieces. I... never imagined that Magneto either had the power or the will -- to destroy the human race... What good is a king if there is no kingdom...?

Appearing in "A Time to Die"Edit

Synopsis for "A Time to Die"Edit

The Hulk smashes the Sanctum Sanctorum, releasing Dormammu into this universe. There is a flash of light and Spider-Man appears to die, with only tatters of his costume left behind. Dr. Strange attempts to fight Dormammu but is killed when Dormammu uses a spell to burst Stephen's head. Sue and Ben of the FF arrive to try and rescue Johnny from inside Dormammu's amulet. In the Supreme Power universe; Reed, Doom, Zarda, and Arcanna approach the exiled Nick Fury telling him they need his help, and that Magneto is destroying the planet and wiping out mankind. Of course Nick knew all about Magneto's endtime plan, but tells Doom that he has to come clean with the others or he won't come back with them. Doom does so, admitting that he had the Scarlet Witch murdered so that he could then swoop in after the battle between mutants and humans and rule everything. In Magneto's Citadel above Antarctica, the X-Men and the Ultimates have arrived to take Magneto down. Angel swoops in through a window, but is immediately slashed open by Sabretooth and bites off one of his wings. Valkyrie wants Thor's hammer back, and severs one of Magneto's arms. He grabs her sword magnetically and attacks here when the rest of the heroes arrive.

Retrieved from "https://heykidscomics.fandom.com/wiki/Ultimatum_Vol_1_4?oldid=1462487"
Community content is available under CC-BY-SA unless otherwise noted.