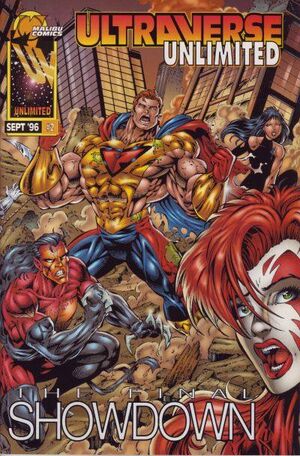 Looking for a fight, Speedy? Glad to give you one!

Ultraforce and the All New Exiles make their final stand! Who trashed New York City? Who obliterated the planet Ozama? What is the fate of the Ultraverse's mightiest heroes? Find out as the two teams tag up in the ruins of the Big Apple for final combat with Maxis! It's a battle which will not only change the line-up of Ultraforce, but will also determine the existence of the Exiles!

Retrieved from "https://heykidscomics.fandom.com/wiki/Ultraverse_Unlimited_Vol_1_2?oldid=1504485"
Community content is available under CC-BY-SA unless otherwise noted.