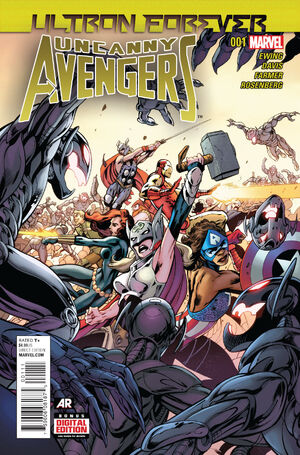 And lo...there came a day. A day when Earth's Mightiest Heroes joined forces with the very gods themselves--to fight what could not be fought alone. A day to live on, in song and story, until the end of time. For on that day...that day unlike any other...The Avengers were born anew!

• The time-spanning epic comes to a senses-shattering finish!

• Asgardia’s Avengers versus the massed forces of Ultron! Can the Avengers triumph - or will evil re-take the throne of Odin?

• Plus - the dark secret of Doctor Doom! And who is... Earth’s Last Avenger?

Retrieved from "https://heykidscomics.fandom.com/wiki/Uncanny_Avengers:_Ultron_Forever_Vol_1_1?oldid=1462576"
Community content is available under CC-BY-SA unless otherwise noted.