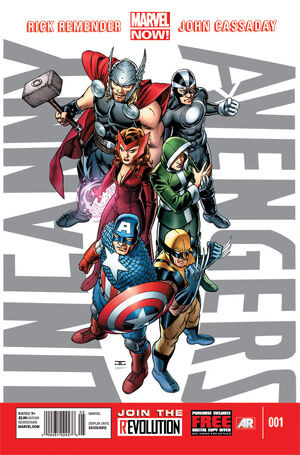 • THIS IS IT! The greatest era of the Marvel Universe starts here! From the ashes of AvX; an all-new, all-different Avengers Assemble!

• Captain America begins his quest to create a sanctioned Avengers unit comprised of Avengers and X-Men, humans and mutants working together – so why is Professor Xavier’s dream more at risk than ever?

• The first attack of the most loathsome villain in history, will quake the Marvel Universe forever!

• The funeral of one of Marvel’s greatest heroes!

Retrieved from "https://heykidscomics.fandom.com/wiki/Uncanny_Avengers_Vol_1_1?oldid=1758874"
Community content is available under CC-BY-SA unless otherwise noted.