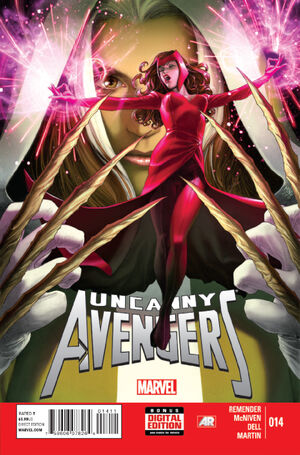 This is not the end.

Appearing in "The Day Nor the Hour"Edit

Synopsis for "The Day Nor the Hour"Edit

Through time and space, Kang travels. He recruits many antiheroes for an unrevealed quest.

Back with the Uncanny Avengers in Akkaba Nebula, Rogue and Sunfire search for Scarlet Witch. Sunfire has his doubts on killing her, but Rogue is fully determined, falsely thinking that Wolverine will be happy if she does.

Scarlet Witch and Wonder Man, meanwhile, are with the Twins continuing to trick them. They prepare to cast the spell. Sunfire attacks Wonder Man, not knowing his plan; Wolverine tells him not to kill anyone. Wolverine, Rogue, and Scarlet Witch fight Grim Reaper and Daken. While Scarlet Witch starts levitating and casting the spell, Daken restrains and taunts his father. Though Rogue could easily help him, she chooses to just throw Grim Reaper away, absorb Logan's powers, and does not try to help him. Instead, Rogue goes for Scarlet Witch, thinking in her bloodlust that she is casting the "No more mutants" spell again. To Wolverine's horror, Rogue jumps up and stabs Scarlet Witch in the stomach while she is still casting the spell. Weakly, she asks why she would do that; Rogue tells her she is too dangerous to live, and Scarlet Witch says that she is also before falling off a cliff. Wonder Man sees her fall, and immediately abandons Sunfire to go help her. Rogue stays at the cliff face, only for Grim Reaper to use his arm to stab her in the back and out through underneath her heart. Shocked, Wolverine breaks free from Daken and starts overpowering him. Grim Reaper sends a shockwave through Rogue, blasting her body (except her skeleton) to bits.

Wonder Man finds Scarlet Witch, who tells him that she needs to finish the spell. After they admit their mutual feelings and share a kiss, Wonder Man decides to give all his energy to her so she may complete the task. The energy is released, completing the spell, but also supposedly destroying Wonder Man. Then Scarlet Witch dies... and the world is covered in rain. Rain.

Retrieved from "https://heykidscomics.fandom.com/wiki/Uncanny_Avengers_Vol_1_14?oldid=1462536"
Community content is available under CC-BY-SA unless otherwise noted.