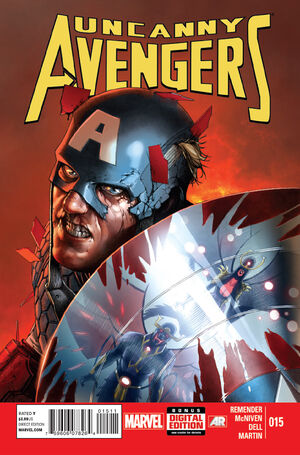 • After the numerous deaths last issue the Avengers Unity Squad is left shattered and broken.

• The fate of humanity rests in the hands of Thor, but can the God of Thunder defeat the combined might of two Apocalypses?

• At the same time the Wasp fights for her life against the unparalleled might of The Sentry!

Puck is apparently raptured along with X-Force's mutant members, despite not being a mutant himself.

Retrieved from "https://heykidscomics.fandom.com/wiki/Uncanny_Avengers_Vol_1_15?oldid=1645102"
Community content is available under CC-BY-SA unless otherwise noted.