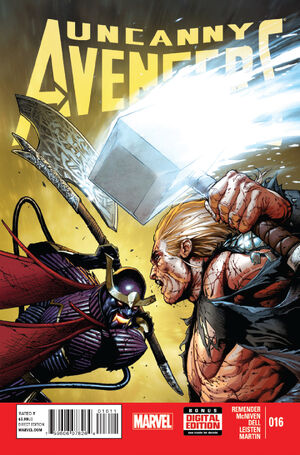 • The main event! Thor vs. Uriel! Feral and vengeful after the death of a teammate, Thor is a mad God out for blood!

• The heroes of Earth rally to stop the unimaginable evil the Twins have released!

• In order to stop the Twins, The Wasp must do something that will curse her evermore!

Namor and Sabra appear among Earth's last defenders, despite mutantkind already being raptured to the Akkaba space ark.

Retrieved from "https://heykidscomics.fandom.com/wiki/Uncanny_Avengers_Vol_1_16?oldid=1462541"
Community content is available under CC-BY-SA unless otherwise noted.