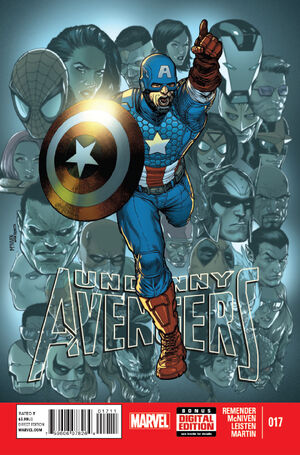 It was always to be this way, my son. You merely provided the key to unlock this terrible fate. The denizens, and heroes, of Midgard allowed petty differences and petulant squabbles to stand in the way of their own future. There is a point in the evolution of any species where they must discard their tribal differences and unite as one people. One cohesive representation of their world on the cosmic stage. This is the test of all life. To see their world relative to the stars. To finally absorb how meaningless their rage at their brothers and sisters truly is! ... I had great expectations they would. Yet they continued to war over their trifling differences. Combat their only means of solution. Too savage to be allowed to join the cosmic community... and the Celestials deemed them unworthy for it. As hard as it will be to accept it... the true fault lies with men. Ragnarok was their choice.

A letter in the future. To a daughter left behind by a parent on a quest. A parent who was there the day when the courage of Earth proved insufficient...

New York. Under a preternatural red sky, the world watches Exitar, Executioner for the Celestials, descend. In the streets, heroes combine their efforts to keep calm while geniuses try to build a stopgap. Hulk will hold Doctor Doom's forcefield generator in place as it protects the world. In low Earth orbit, a coalition of superhumans will delay the cosmic god, and everyone hopes the Avengers Unity Squad, who are outside the forcefield, can find a way to save the world.

On the Apocalypse Twin's Ark, Thor battles Eimin, who wields the axe Jarnbjorn. She poses the riddle that she will take from Kang the one thing he prizes the most, as revenge for what he did to the twins. Impossible as it seems, the fight is surprisingly even.

In the bowels of the ship, Eric Williams, the last of the Horsemen of Death, begs the Wasp to kill him, claiming it is the only way she can achieve victory. Just like Daken and Bob Reynolds before him, he incessantly monologues, claiming that the only way for the Wasp to become pertinent to the disaster she faces is the choice she judged Wolverine for: kill her opponent.

On Earth, the forcefield flares to life. Cosmic death is staved off. Hope rekindles. Thor claims Jarnbjorn to use as evidence to talk down Exitar... too late. In New York, casings crack, and the resulting explosion destroys the forcefield engine and the top of Avengers Tower. Exitar decends to Earth, as Eric Williams gloats. Captain America interrupts, giving the Wasp the time to go for the Tachyon Dam holding off time travel reinforcements.

But as Wasp struggles, Eric Williams uses his scythe to kill Captain America. On Earth, the Celestial causes untold destruction, as the Avengers admit that all their efforts were for nothing. As he has watched so many events, Uatu watches Exitar tear the planet apart, and the silence that follows.

Eimin returns to the Ark, gleeful at the destruction, answering her own riddle: They have robbed Kang of his prize. There is no longer an Earth for him to conquer.

As the shockwave of the destroyed Earth wracks the Moon, the Apocalypse Twin's Ark flies through space, and Thor creates a portal to elsewhere.

He finds himself in the space that Odin exiled himself to, to watch his brother's corpse. There, Odin bonds with his son over the tragedy of the Earth's destruction. However, the elder god is quick to point out that the Earth faced the same threshold all worlds eventually face: to unite against the unknown, becoming stronger... or to fall into argument and waste their strength in foolishness. The tragedy is that the humans chose the latter. Odin tells Thor that the death is not his fault, and walks away. Thor does not rise.

• The Avengers Assemble! But are they too late?

• The Twins’ revenge on Kang is complete, but at what cost?

Retrieved from "https://heykidscomics.fandom.com/wiki/Uncanny_Avengers_Vol_1_17?oldid=1533559"
Community content is available under CC-BY-SA unless otherwise noted.