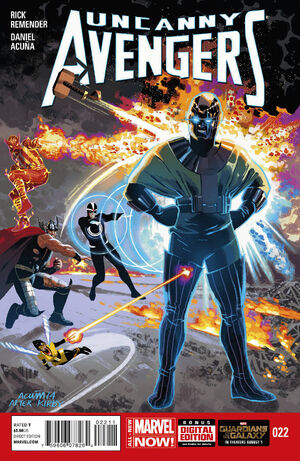 Appearing in "Avenge The Earth: Conclusion"Edit

Synopsis for "Avenge The Earth: Conclusion"Edit

In Manhattan, the various members of the Chronos Corps are arguing with their analogues from the present. All of them tell the same story: Kang has acquired cosmic power, making him the most feared person on the planet. Whatever reason for their initial service to him, they now have to continue serving, or Kang will destroy them.

In low Earth orbit, Kang still drinks of the energy around the corpse of Exitar the Executioner. The fearsome energies of the dead god are enough to burn Deathlok Abomination, causing him to lose his grip on Thor. Kang acknowledges that by his own code he owes Thor a physical combat, but that it will come at a time of Kang's choosing. He backhands the god of thunder towards the Earth.

Thor is not alone. Sunfire flies towards Kang carrying Havok. In flight, Sunfire says he warned of Kang's betrayal when he approached them on Planet X, and Havok acknowedges this. Now their only hope of saving the world is to use their mutant powers to absorb Exitar's powers first. Striking from behind, they are ambushed by Kang, time-hopping. Kang stabs Sunfire in the heart with his newfound cosmic power, slowing down time so as to prolong the agony. As Havok charges up on the energy, preparing to exact vengeance, Kang sneers: if Havok will not serve, he will never see his daughter again.

On Earth, the Chronos Corps is about to defeat the Avengers, but they are caught off guard by the arrival of Immortus, Kang's possible future self, and his own cross-time allies, the Infinity Watch. Tipping the balance in Manhattan, they give time for the real fight to continue...

At the corpse of Exitar, Kang starts monologuing, claiming that he arranged Havok's marriage to Wasp to arrange for just this moment. Havok's mind reels from this, holding to the notion that Kang has no reason to lie... until the facade drops. Kang, despite his veneer of omnipotence, is a sociopathic man with an agenda. He has no reason to tell his opponent the truth. Havok runs up to strike Kang - he will rescue his daughter by force.

Despite Havok's cosmic power, Kang is stronger... but a sudden arrival tips the scales. Sunfire, reanimated as an energy being by the power of Exitar's corpse, makes swift work of Kang before firing a massive energy burst at the Apocalypse Twin's Ark.

In the Ark, Eimin uses her temporal synaesthesia to see the whole truth at last: Kang was manipulating them their whole lives, and by rebelling, they gave him exactly what he wanted. Acknowledging that they will get no vengeance, they take solace knowing that they will die together.

At the corpse, Havok gives Kang a taste of his own medicine by ambushing and immediately overmatching him. Complaining that Havok will suffer for this, Kang teleports away, taking all his soldiers with him...

...all but one. Ahab has remained in the past. His mission awaits him.

The Sentry takes custody of the corpse of Exitar the Executioner. He tells Wasp that Exitar will one day return from the White Hot Room. He takes the corpse away from Earth, but warns that the Celestials' wrath will be great.

In Manhattan, people search for their loved ones. Rogue, no longer able to sanely contain the minds of almost every superhuman on Earth, starts to scream. Scarlet Witch steps in, using her remaining magic to disperse the power to its original owners. Rogue still complains, and the Avengers face a new wrinkle - Rogue has Wonder Man's powers and mind within her now.

Havok is brought down by Sunfire. Scientific curiosity at Sunfire's new powers is tabled by common courtesy, as Havok and Wasp mourn for their daughter.

In an epilogue in the Sahara Desert, the remaining Horsemen of Death, Grim Reaper and Daken, emerge from the wreckage of the Mutant Ark holding the corpses of the Twins. They complain to each other that they had been promised victory and revenge - horrifically-disproportionate revenge - but that they are still alive, and that they can work with that.

• Complete unity is established, but is it too late?

• The fate of the seven prime timelines decided!

Cover is a homage to Avengers #8.

Retrieved from "https://heykidscomics.fandom.com/wiki/Uncanny_Avengers_Vol_1_22?oldid=1646438"
Community content is available under CC-BY-SA unless otherwise noted.