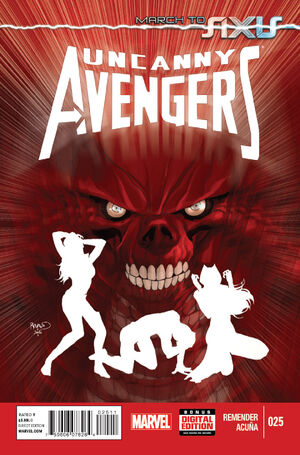 Magneto did not kill evil incarnate. He unleashed an Onslaught of it.

Appearing in "The Low Road"Edit

• The dark path to AXIS starts here. An event two years in the making!

• The Red Skull and his S-Men have already begun the great vanishing, The Uncanny Avengers are too late.

• Magneto vs Red Skull blood match that will result in a terribly altered Marvel Universe.

Deadpool 75th Anniversary Variant is an homage to Marvel's The Avengers poster.

Retrieved from "https://heykidscomics.fandom.com/wiki/Uncanny_Avengers_Vol_1_25?oldid=1462558"
Community content is available under CC-BY-SA unless otherwise noted.