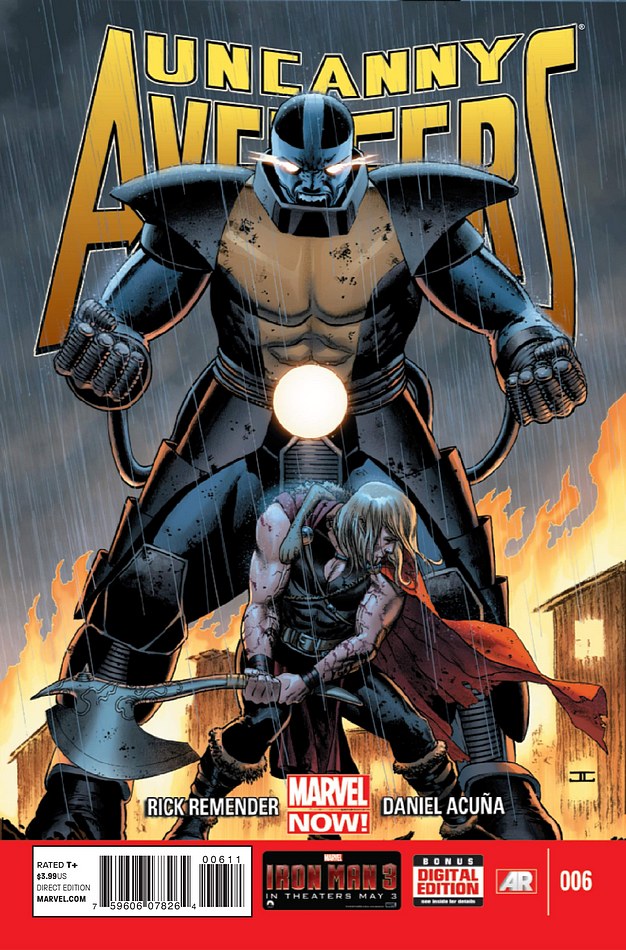 Be it tomorrow or a thousand years from now...the mistakes you've made this day will haunt us all.

In a Scandinavian bar in 1013 AD, Thor Odinson was enjoying himself in a barfight when he was attacked. His attacker, introducing himself as Apocalypse, explained that he acts to safeguard the future. When Thor attacked again, he discovered that Apocalypse is wearing armor capable of withstanding his godly might. He departed for Asgard.

Apocalypse returned to his current base, a Celestial-built floating pyramid, in which his old enemy Pharaoh Rama-Tut was resting. The Pharaoh had informed him that in the future a small number of people will disrupt his plans, and that they or their descendants must be killed. Apocalypse demanded the next name. Irate, the pharaoh acquiesced: Folkbern Logan.

In Asgard, Thor arrived and demands an audience with his father. Odin explained that Apocalypse answered to the Celestials, and wore their armor. The Celestials wrung a non-agression treaty from the gods of Earth when last they came. When Thor demanded Odin help him anyway, Odin asks him to take the high road. As Thor left, he asked Loki for help, and Loki led him to a hidden scroll in Odin's library, which could bless a weapon to pierce Celestial armor - if the blessing is cast by Odin or his blood kin. Acknowledging his thanks, Thor departed... only for "Loki" to be revealed as Kang the Conqueror, Rama-Tut's future self.

In London, Folkbern Logan, the last pagan in London, was on guard duty against Norse raiders, when his guard position was attacked by the Horsemen of Apocalypse. As his friend died, Folkbern prayed for deliverence, and his prayer was answered by the arrival of Thor, who promptly slew the attackers. Apocalypse complains that Rama-Tut never warned him of this. Rama-Tut acknowledged the accusation and teleports away. Apocalypse vowed revenge, but he had other matters at hand: if his enemy's ancestor lived in London, he would burn down London to kill him.

Thor broke into the craft and accused Apocalypse of cowardice. Apocalypse managed to wound the god with his own axe, but Thor got the upper hand and cut the armor open. Stunned, Apocalypse said that Thor had cheated, but vowed to kill him with an explosion. Thor escapes, leaving a spectacle in the London sky, and confusion in the hear of Folkbern Logan.

That night, in Asgard, Thor boasted of his victory, only to be accused of childishness by Odin. The spell performed on the axe was no blessing, but a curse on Thor forevermore. In his search for petty revenge on Apocalypse, Thor had doomed worlds. Odin only hoped that Thor would one day learn from his mistakes.

In the present day, in the final resting place of Baron Mordo in Brazil, Kang appears to take the axe Jarnbjorn. It seems he has a plan.

• New regular artist Daniel Acuña joins just in time for Thor vs Apocalypse in the 11th Century! Wait until you see these two titans first meeting and first battle!

• The Avengers’ ancestors are being hunted and only a young Thor can save his future companions!

• And with Rama Tut and Kang pulling the strings, you know nothing good can come from any of it.

• The future begins in the past! This is it! The future of the all-new, all-different Uncanny Avengers begins here and the effects will reverberate across the Marvel Universe for years to come!

Retrieved from "https://heykidscomics.fandom.com/wiki/Uncanny_Avengers_Vol_1_6?oldid=1462520"
Community content is available under CC-BY-SA unless otherwise noted.