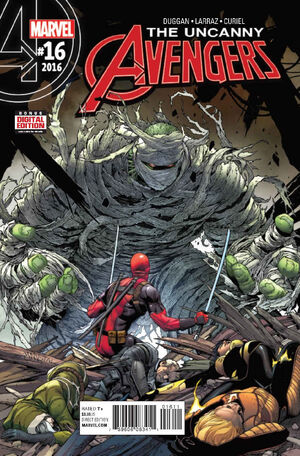 • The Hand has resurrected the Hulk, and the only ones standing in the way of the undead rampaging brute are the former Avengers of the Unity Squad.

• The first bullet point of this solicit is so damn compelling that a second selling point is completely superfluous.

• Steve Rogers gave an order that the Avengers did not follow. We’ll find out how that works out for everyone!

Retrieved from "https://heykidscomics.fandom.com/wiki/Uncanny_Avengers_Vol_3_16?oldid=1651974"
Community content is available under CC-BY-SA unless otherwise noted.