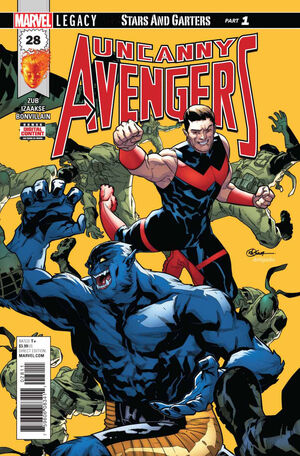 Appearing in "Stars & Garters, Part One: A Pint or Two"Edit

Part Avengers and part X-Men. Two of Earth’s mightiest heroes and two of Earth’s mightiest friends. And when it comes to super-heroics, Wonder Man and the Beast have seen it, done it, and they got the T-shirt. When the world throws you cosmic conflict, global calamity, death, rebirth and heartache aplenty, it’s important to remember where your friends are. Join us for “A Pint or Two,” won’t you? PLUS: Includes 3 bonus MARVEL PRIMER PAGES! Story by Robbie Thompson and a TBA artist!

Retrieved from "https://heykidscomics.fandom.com/wiki/Uncanny_Avengers_Vol_3_28?oldid=1651998"
Community content is available under CC-BY-SA unless otherwise noted.