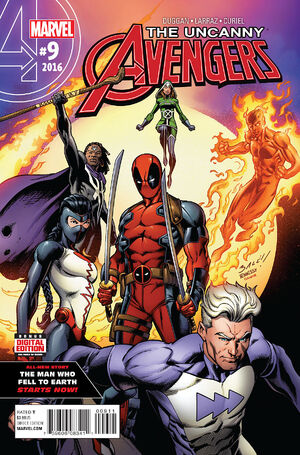 Appearing in "The Man Who Fell To Earth: Chapter One"Edit

THE MAN WHO FELL TO EARTH starts now!

• ULTRON IS BACK! BUT THIS TIME, HANK PYM IS IN CONTROL--OR IS HE?

• The taming of Ultron creates unexpected complications and divides the Unity Squad.

Retrieved from "https://heykidscomics.fandom.com/wiki/Uncanny_Avengers_Vol_3_9?oldid=1651960"
Community content is available under CC-BY-SA unless otherwise noted.