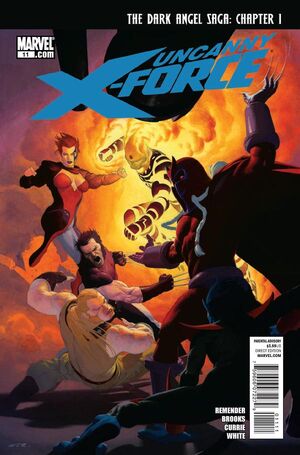 Appearing in "Dark Angel Saga Chapter 1: Journey to the Age of Apocalypse"Edit

Dark Angel Saga pt. 1 Apocalypse is dead. His heir, Archangel, has picked up where his predecessor left off, amassing an army of En Sabah Nur’s greatest servants! The only hope X-Force have of saving Warren Worthington from the dark entity that inhabits his soul, rests in a dimension where Apocalypse, and his technology, took over the world, the solution lies in—The Age of Apocalypse! However, before X-Force can obtain the thing capable of saving their friend, they must defeat The Amazing X-Men!

Retrieved from "https://heykidscomics.fandom.com/wiki/Uncanny_X-Force_Vol_1_11?oldid=1648071"
Community content is available under CC-BY-SA unless otherwise noted.