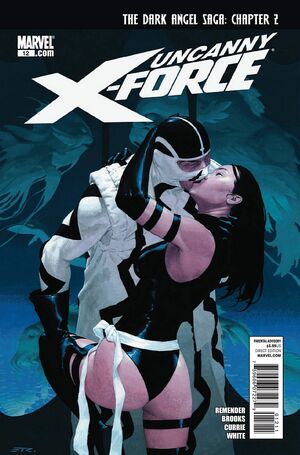 We sort of glazed over something here...this life seed, it'll kill him? Are we talking about killing Warren?

In Atlantis, Wolverine is taking a drink. He is then interrupted by AoA Jean Grey, who laments how she misses her Wolverine, her husband. They talk, before getting into a kiss. However, Jean breaks it off, spotting a Sentinel breaking into Atlantis. She quickly dispatches it with her Phoenix powers. Through this small victory, it is apparent that more Sentinels will follow.

Nightcrawler is willing to point fingers at Wolverine, for their bit of peace was washed away when X-Force arrived. Jean reassures him that Wolverine is no snitch and that there is no time for an internal strife. A meeting is convened with the AoA X-Men and X-Force. With the help of a docile M.O.D.O.K. that was ineffectively cloned from Professor X, they determine that there are still Life Seeds lying in a dead Celestial Gardener killed by Apocalypse. They can salvage a new one, but they have a matter of getting X-Force back home. The answer is Gateway, who is imprisoned in the Akkaba prison known as The Sky. It is then agreed that Fantomex will take a team to retrieve the Life Seed while everyone else extracts Gateway. Once the meeting is adjourned, Wolverine is introduced to Kirika, daughter of AoA Wolverine and Mariko Yashida.

Meanwhile, Fantomex tries talking to Psylocke about preventing another Apocalypse. He insisted that killing the child Apocalypse was the right thing to prevent him from becoming a monster. And the same thing will happen to Archangel. He tells her that she doesn't love Archangel, but is only helping him because she wants to be needed. In response, Psylocke punches him across the face. Fantomex then kisses her, telling her that the man she loves is already gone; she then pushes him away, refusing to give up.

As Fantoxmex takes Scott Summers, Rogue and Sunfire to find the Life Seed, everyone else flies in the captured Sentinel to infiltrate The Sky. En route, Wolverine has a talk with Kirika, telling her about how he loved the Mariko of his dimension "to the Heavens".

Once they arrive at The Sky, Magneto uses his powers to distract the Sentinels while the others infiltrate the prison, which Jean explains is a Master Mold. As they walk through the guardless prison, Wolverine tries convincing Jean to come back to his world. Unfortunately, they are interrupted by the Black Legion. Nightcrawler advises they run, for the Black Legion is too powerful for them to fight. Unfortunately, just as they make a run towards Gateway's cell, Kirika is incinerated by AoA Wolverine, who is guarding Gateway.

Trapped in the Age of Apocalypse! To acquire their salvation Fantomex must lead a team of X-Men to a distant galaxy and steal the origins of life itself from the god race known as The Celestials! On Earth, within the mysterious floating city know as The Sky, the rest of X-Force fight through an army of twisted versions of Earth’s mightiest beings as they seek a route home. If they do not succeed, and soon, Archangel will become the new Apocalypse!

Retrieved from "https://heykidscomics.fandom.com/wiki/Uncanny_X-Force_Vol_1_12?oldid=1462763"
Community content is available under CC-BY-SA unless otherwise noted.