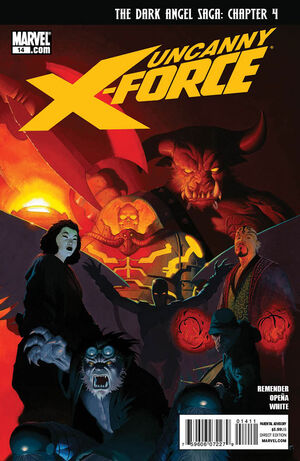 Appearing in "Dark Angel Saga Chapter 4: Thunder For The Next World"Edit

Years ago, Wolverine helplessly watched as Jean Grey, the love of his life, died before his eyes. Years later, he would lose his best-friend Nightcrawler to a similar fate. In order to save our world, can he allow them to die again? X-Force team up with The Amazing X-Men for the final push against the heir of Apocalypse, in a battle Royale that will force Wolverine to make the hardest choice of his life. One world must die!

Retrieved from "https://heykidscomics.fandom.com/wiki/Uncanny_X-Force_Vol_1_14?oldid=1649421"
Community content is available under CC-BY-SA unless otherwise noted.