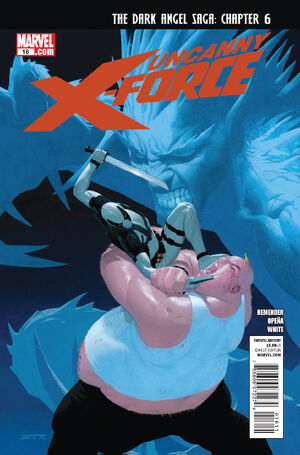 Appearing in "Dark Angel Saga Chapter 6: No Such Thing"Edit

The fate of the entire world rests on the shoulders of Deadpool! A new Death is born! Refugee mutants from the Age of Apocalypse descend on our world! Can the merc with a mouth hold off long enough for X-Force to regroup? Is there any hope of staving off the Age of Archangel? Not if Iceman and The Blob have their say. Monsters of doom and glory, Rick Remender (Venom, Punisher), Jerome Opeña (Punisher, Moon Knight) and legendary colorist Dean White (Avengers) reunite to serve up another boss bowl of breakneck action in the hottest book on the stands!

Retrieved from "https://heykidscomics.fandom.com/wiki/Uncanny_X-Force_Vol_1_16?oldid=1751964"
Community content is available under CC-BY-SA unless otherwise noted.