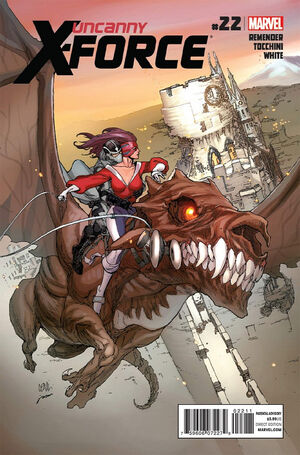 Krokwel and Betsy’s deal is conducted. He provides her and Fantomex transport to the nearest Earth portal. Fantomex tells Betsy he knows she doesn’t have feelings for him and only made her doubt her love for Warren in order for her to do what had to be done. Fantomex wants Betsy to reveal how she got Krokwel to help them, but she refuses to say. Meanwhile Nightcrawler convinces Wolverine they should be helping the people of Otherworld against the invaders. They are suddenly attacked by an army of Dragon riders zombies. Meggan and Kurt are separated from Wolverine and Deadpool. Logan and Wade finally make it to the Goat’s chamber where they face him. At the same time, while reaching the Earth portal, Fantomex and Betsy are ambushed by the Skinless Man. It’s revealed that once, the Skinless Man was part of the Weapon Plus program as Weapon III. He was sent to Otherworld to acquire the Orb of Necromancy. It turned out someone inside Weapon Plus didn’t want him to get the Orb, so Fantomex was sent to stop him. James Braddock eventually found him and sentenced him to have his skin removed. Fantomex later stole his skin and used as sentient bullets. Now the Skinless Man is back for revenge, ripping Fantomex’s skin off.

Retrieved from "https://heykidscomics.fandom.com/wiki/Uncanny_X-Force_Vol_1_22?oldid=1462783"
Community content is available under CC-BY-SA unless otherwise noted.