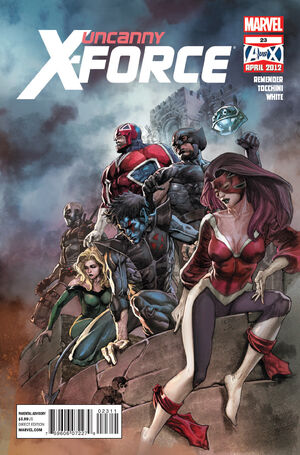 Millions of souls were being consumed every second. There was no other way. And you know that. But you made me do it. So you get to stay the good guy.

While Deadpool and Wolverine are fighting the Goat; Meggan, Brian, Kurt and the Captain Britain Corps try to prevent the enemy army from getting near the tower. Elsewhere, Betsy uses Krokwell’s poison to get rid of the Skinless Man, freeing Fantomex. The Skinless Man flees, while Betsy learns the rest of X-Force are in danger in Otherworld. The Goat’s army succeeds and breaks into the Omniverse Tower, and he’s about to spread his will across the all, into every mind. Betsy and Fantomex reach the Goat’s tower and distract him by posing as Merlyn and Roma via Fantomex’s misdirection power. The Goat breaks the misdirection, but it gives Betsy enough time to look into his mind and learn who he truly is. The Goat heads to the Omniverse Tower where he takes everyone out, except for Jamie, telling him he would like to see what happens next. The Goat becomes the Omnigod, spreading his essence across the universe. Betsy contacts Brian via telepathy and tells him that the Goat is Jamie from the future who made a deal with the Goat of self-propagation, in order to seek cosmic omnipresence and enlightment, but in the process the Goat ended up inhabiting Jamie’s body. Betsy tells him the only way to stop the destruction of everything is by killing Jamie. Brian refuses to do it, so Betsy takes over Brian’s body and snaps Jamie’s neck, ending it all. Betsy tells Brian he made her do it so he gets to stay the good guy.

• The Multiverse Is In Danger, The Captain Britain Corps Is In Shambles And It Is Up To X-Force To Save The Day. • A Terrible Choice Must Be Made For The Protection Of All Reality!

Retrieved from "https://heykidscomics.fandom.com/wiki/Uncanny_X-Force_Vol_1_23?oldid=1505788"
Community content is available under CC-BY-SA unless otherwise noted.