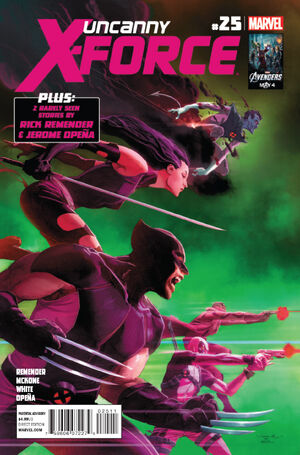 Appearing in "Final Execution Chapter One: Purity; Appetite for Destruction"Edit

• The epic saga THE FINAL EXECUTION begins here! • Who are the Omegas and why must X-Force hunt them down? • Included in this issue: Two rare stories by Rick Remender and Jerome Opeña starring Wolverine and Deadpool!

Retrieved from "https://heykidscomics.fandom.com/wiki/Uncanny_X-Force_Vol_1_25?oldid=1757525"
Community content is available under CC-BY-SA unless otherwise noted.