Start a Wiki
Part of the 'Final Execution' story arc 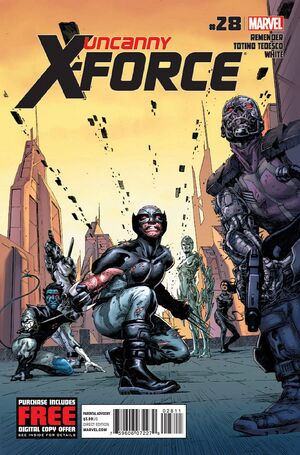 Murder for any reason is still murder.

Moments before Ultimaton detonates, Psylocke enters the mind of Gateway and accesses his powers for a jump. X-Force are teleported 30 years into the future where they are greeted by Deathlok who states that he is not here to hurt them. He says that others are however and that they have anticipated their arrival and will be here soon. The others are revealed to be future versions of Hope Summers, Cable and Deadpool. They find blood-oil tracks leading them to believe that Deathlok was there.

They contact headquarters and give them the news and the future Wolverine orders them to find them. Wolverine ponders that this isn't how he remembers it happening and the Magistrate who is revealed to be a future Psylocke states that due to Deathlok's tachyon transmitter always whispering back and forth between his past and future selves, he is able to alter the future. The Punisher recommends killing them but Future Psylocke orders them to be delivered unharmed. Meanwhile Deathlok gives X-Force earpieces to guard them from the Magistrates surveillance and takes them to his hideout. Wolverine demands an explanation from Deathlok who promises to give him one and meanwhile E.V.A. tends to Psylocke's wounds and tries to comfort her. Nightcrawler asks Deadpool why he accepted this mission when he has lost his healing factor. Deadpool states that he did it because he didn't want to let anyone down because this is the closest thing to a family he has.

Wolverine ponders that this future doesn't seem half bad but Deathlok states that totalitarian fascism and preemptive assassinations brought peace by fear and that he fights for people's free wills. Meanwhile they witness a man breaking into an apartment and taking another man while his family screams. The woman pleads that her husband didn't do anything and that they have children and the man responds that her husband didn't do anything yet and that X-Force just saved her children's life. Meanwhile, Deathlok tells X-Force that this is an example of pre-emptive termination, X-Force's methodology taken to its exponential conclusion and reveals that the Future Psylocke is in charge of it all.

Deathlok tells them how this future came to pass. Evan Sabahnur ascends as Apocalypse and becomes the worst threat the world had ever known. Logan gathered an army of X-Force comprised of different heroes and together they managed to kill Apocalypse. X-Force was elected to ensure nothing like that happened again and they began killing every criminal. When there were no criminals left, they began killing people as soon as they made up their mind to kill. Wolverine remains unrepentant about this while Deathlok insists that murder for any reason is still murder. Wolverine rationalizes that murder is necessary sacrifice to protect the innocents but Deathlok notes that he doesn't believe that. Wolverine stubbornly states that his actions speak differently. Seeing as he will not see reason Deathlok defers control to his savage human host, who decides to kill them to avert the future but he is defeated by Cable and the future X-Force.

While Cable is explaining that they're not there to hurt them, future Deadpool asks where Psylocke is. Psylocke has gone to try and kill her future self but realizes that this will change nothing, nor will going back with what she knows change anything. She realizes that the only way to avert this future and prevent Fantomex's sacrifice from leading to this was to kill herself. She proceeds to commit seppuku.

• A new member joins the team!

Retrieved from "https://heykidscomics.fandom.com/wiki/Uncanny_X-Force_Vol_1_28?oldid=1462798"
Community content is available under CC-BY-SA unless otherwise noted.