Start a Wiki
Part of the 'The Apocalypse Solution' story arc 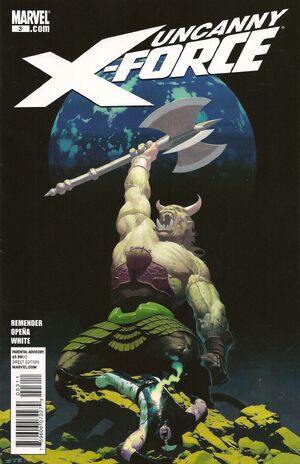 “THE APOCAYLPSE SOLUTION,” PART 3 Uncanny X-Force versus Apocalypse’s Last Horsemen to the death! With their target within striking distance the team separate in hopes that one of them might infiltrate the Akkaba stronghold and assassinate Apocalypse. However, breaking apart has left them vulnerable, and one member pays a heavy toll for the strategy. Will a member of the team die to stop Apocalypse? Or will the price be heavier still?

Retrieved from "https://heykidscomics.fandom.com/wiki/Uncanny_X-Force_Vol_1_3?oldid=1649415"
Community content is available under CC-BY-SA unless otherwise noted.