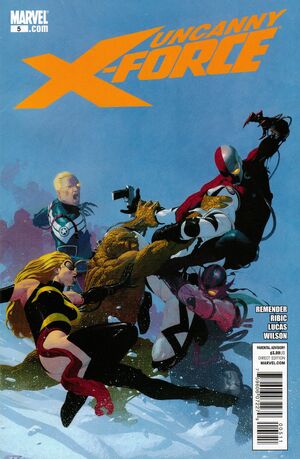 Appearing in "Deathlok Nation (Chapter One): The Time Infection of Weapon Infinity"Edit

There are innumerable and varying potential futures awaiting mankind. Between them exists only one constant: The rise of the Deathloks! Seeded in our present they grow, a time virus spreading across all possibilities, infiltrating the fate of mankind. One thing stands in their way; a man who shouldn’t exist. They come in waves, an army of time displaced Deathlok troopers made from Earth’s greatest warriors; Captain America, Spider-Man, Elektra, Cyclops, Venom, The Thing, Bullseye--all soldiers in the army of Deathlok. All operating under one directive: Fantomex must die! The hottest book on the stands just gets hotter as fan favorite writer Rick Remender (Punisher, Fear Agent) is joined by superstar artist Esad Ribic (Wolverine, Loki)!

Retrieved from "https://heykidscomics.fandom.com/wiki/Uncanny_X-Force_Vol_1_5?oldid=1650290"
Community content is available under CC-BY-SA unless otherwise noted.