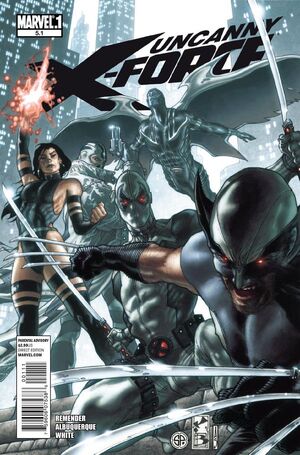 Special Point One issue. START READING with this Point One issue. When a situation calls for hard choices, the X-Force is there to step in. Lady Deathstrike, with the deadly Reavers at her side, set out to destroy the X-Men in their home! Deathstrike will obliterate the X-Men or die trying, and this new Uncanny X-Force is more than happy to oblige. As the line between right and wrong become more and more blurred, will the Uncanny X-Force be heralded as heroes...or villains?

Retrieved from "https://heykidscomics.fandom.com/wiki/Uncanny_X-Force_Vol_1_5.1?oldid=1650287"
Community content is available under CC-BY-SA unless otherwise noted.