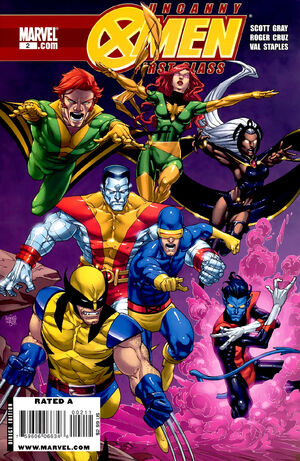 Appearing in "To Err is Inhuman..."Edit

Nightcrawler thought he’d found sanctuary in Attilan, fabled city of the Inhumans…but now he’s transgressed their most sacred law! Kurt Wagner stands trial before an angry mob, with Black Bolt the ultimate judge of his fate – and if the verdict is guilty, he’s one dead mutant! So will the X-Men stand by and let that happen? Not a chance! Get ready for an explosive battle between the world’s greatest mutant team and the Inhuman royal family – the question is, will Attilan survive it?!

Retrieved from "https://heykidscomics.fandom.com/wiki/Uncanny_X-Men:_First_Class_Vol_1_2?oldid=1463106"
Community content is available under CC-BY-SA unless otherwise noted.