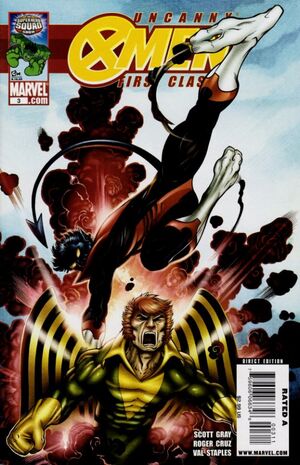 But this old dog's learnt ev'ry new trick in the book!

Appearing in "The Next Life"Edit

Synopsis for "The Next Life"Edit

When Banshee's father-in-law, Patrick Rourke, comes to the X-Mansion, he brings along with him the apparent ghost of his daughter, Maeve Rourke. Banshee follows her spirit to Belfast, Maine, where Patrick reveals that he hired Julius Dupree to raise the spirit of his daughter to exact his revenge on Banshee by killing him and his new love, Moira MacTaggert.

Retrieved from "https://heykidscomics.fandom.com/wiki/Uncanny_X-Men:_First_Class_Vol_1_3?oldid=1463108"
Community content is available under CC-BY-SA unless otherwise noted.