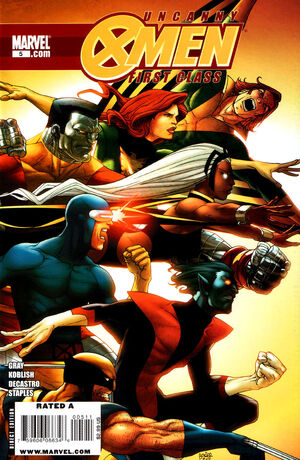 Appearing in "The Knights of Hykon"Edit

The world trembles as the sky begins to boil! Professor X attempts a desperate rescue mission on the Starcore One satellite but a threat from galactic legend is waiting! Who are Burning Moon, Cloud Runner and Sky Song, and how are their fates tied to the X-Men? Earth faces destruction as the mutant heroes battle an unstoppable enemy… The Knights of Hykon! (All this and Nick Fury too!)

Retrieved from "https://heykidscomics.fandom.com/wiki/Uncanny_X-Men:_First_Class_Vol_1_5?oldid=1463112"
Community content is available under CC-BY-SA unless otherwise noted.