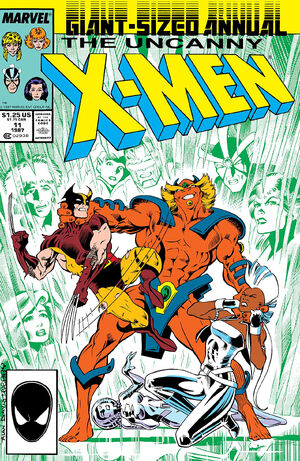 Forgive me. I forget my manners. How rude and ungentlemanly. I am Horde!

Appearing in "Lost in the Funhouse"Edit

Synopsis for "Lost in the Funhouse"Edit

Wolverine is stumbling back to the X-Mansion blind stinking drunk, singing at the top of his lungs. His voice rouses all of the members of the X-Men and their guests, Brian Braddock (Betsy's brother, Captain Britain) and his girlfriend Meggan. When Alex Summers points out that Logan is drunk, Logan denies this, telling him them that his healing factor makes it impossible to be so and stumbles into the mansion. When the others ask Storm if they should do anything, Storm tells them that it is a private matter that Logan must deal with alone. Going back inside, Betsy begins making tea for her guests. While Meggan occupies herself with American television Brian asks his twin sister if she has found the sanctuary she sought at Xavier's school. Betsy tells him that all she has found is that this place is as unsafe as anywhere else and that most of the X-Men are warriors by design, choice, or have been forced into the position due to circumstance. Betsy confides in her brother, telling him that she is not sure what her role among this eclectic group should be.

While upstairs, Logan comes out of the shower mostly sober and begins to meditate before a picture of him and Mariko Yashida. His previous display outside was an expression of his sorrow due to the fact that it has been one year since he and Mariko were supposed to have been married before she called the wedding off to straighten out her clans criminal affairs[2]. Talking to himself, he wishes he could give into the animal and give up on the rules, but Logan -- the man in him, tells him that he must wait. Storm meanwhile has returned to her room to prepare to relax when she is attacked by a strange being. This attack is detected by Psylocke who calls the other X-Men to help. Rogue, Brian and Meggan arrive first and are easily defeated. When Logan runs up to greet their foe he blind sides Dazzler and is knocked back and Longshot and Psylocke are also easily felled. With the X-Men all in stasis their foe reveals himself, a supremely powerful being called Horde.

Teleporting them all away from the X-Mansion and putting them in their uniforms, Horde explains that he is an alien being that is also a mutant of his race and that he seeks to rule all. With his supreme power he shows that the X-Men and their allies abilities have no effect on him and that they must concede to do his bidding or he will destroy their world. When the full measure of their powers prove unable to even scratch their foe, the X-Men surrender and agree to help Horde. Horde tells the X-Men that he has studied them for some time and he finds that their skills should prove sufficient to breach the Citadel of Light and Shadow and steal for him the Crystal of Ultimate Vision. Showing them where the Citadel is, the X-Men agree to go, as they walk off Wolverine and Storm agree to follow Horde's orders for now hoping that they can find some means of defeating him within the Citadel.

Before they go inside, Longshot becomes too frightened to enter, however when Dazzler insists that he should come (secretly wanting him to come) he decides to go along with them. When he crosses into the citadel the door slams shut and none of their powers are strong enough to smash through it. With no other options, Storm sends Wolverine ahead to track their way to the Crystal and has Betsy psi-link everyone. As they begin their trek Rogue is distracted by a strange glow and finds that one of the walls is really a window into her ideal world: the old South as it was years ago. She is surprised when her ideal of the plantation princess is herself, her double comes to the window and tells Rogue that this can be her reality if she wishes it to be. When Rogue admits she wants it, she is sucked into this perfect world of her desire her body becomes inert and crumbles before the X-Men when they realize what has happened.

With the threat the Citadel poses apparent, Storm advises the other X-Men to stick close together. As they continue on, Longshot notices that his hand is starting to fade away, however he fights it off and follows after his comrades, not wishing to abandon them. When Captain Britain begins cautioning Dazzler and Havok about their powers ricocheting off the crystalline walls of the citadel, Alex loses his temper. This causes him to wish that he no longer had to keep his powers in check, causing him to enter a fantasy world where he no longer has to do so, and becomes a star, destroying everyone around him. Coming to terms with losing Havok, the group presses on, continuing to follow Logan's trail when suddenly Dazzler notices that Longshot is fading away. Despite her pleas to her friends to make it stop, nobody can prevent Longshot from fading away.

Alison is distraught that Longshot has also perished as it was her who wanted him to come along and she runs off on her own. When Captain Britain tries to go after her, Storm orders him to stay with the group and tells Betsy to psi-link, hoping that Dazzler will catch up to them when she comes to her senses. Psylocke manages to calm Dazzler down and convince her to come back, however her doubts send her into her own fantasy world. At first she is given a glimpse of the fate her father had for her: becoming an attorney like him, and saw that she would have brought the Kingpin to justice and eventually become the Chief of Justice to the United States, the first woman to hold the position. However, she wonders about her own dream of being a musician, and is shown a glimpse of the fame that she so desperately sought out. She is shown a last vision, where she is a homeless loser, when she wonders which one of these cross roads she truly wants her own personal doubt lands her into a fantasy world of a homeless destitute.

When Betsy reports to the others that she lost Dazzler she becomes angry and strikes one of the citadel walls, causing it to shatter. While the others examine the damage Betsy notices that some of her skin has ripped and beneath is solid metal. She decides to hide this from the others when they decide to press onward. Becoming tired of t his constant travel, Captain Britain uses his strength to smash through the various floors of the Citadel while Meggan carries Storm and Betsy down. When they reach the bottom floor, they are about to move on when Brain notices something in a mount of rubble and smashes it. On the other side is a doorway to his and Meggan's ideal world: where they are married and have a child and live happily with Brian's sister Betsy. When they decide to go to that world they beckon Betsy to join them. Betsy refuses, ripping off her skin revealing a metal form underneath telling them her true desire is to protect her friends. Not accepting Betsy's new form the frightened Brian and Meggan flee into their ideal fantasy world.

When Storm offers her condolences Betsy tells Storm that she has realized the steel she longed to have inside her as one of the X-Men was in her all along. She decides that Horde deserves to die for what he has done to the X-Men and her brother and leaves Storm to go after the crystal alone. Not far ahead, Logan is nearing the Crystal when he is sucked into a fantasy world where he finally has his hearts desire: marriage to Mariko. However, his dual nature causes this fantasy to change to a loud punk rock show and Mariko into Yukio. This shocks Logan enough to realize that it's an illusion and smashes free. He arrives to see Psylocke fighting Horde as he falls, but he cannot come to her aid and smashes through the part of the citadel where Storm just recently entered. As Storm approaches the crystal she is about to grasp it when something grabs her and pulls her through the crystalline walls.

Storm finds herself in her ideal fantasy: adventuring through Tokyo with Yukio. However she manages to resist this desire to fulfill the X-Men's mission and leaves. As she exits Logan crash lands next to her. As they are about to go to the crystal Horde arrives, tossing Betsy's severed head toward them. Seeing to save Ororo, Logan pushes her back into her fantasy world and rushes for the crystal. Horde manages to stop him by throwing a javelin impaling Logan through the back. Horde then kills Logan, however a single drop of Logan's blood lands on the Crystal of Ultimate Vision. Much to Horde's horror, Logan is resurrected from this single drop of blood and endowed with the power of the crystal -- absolute omniscience. Knowing that the crystal that Horde wears on his brow is part of the crystal, Logan reclaims it causing Horde -- already many centuries old -- to rapidly age and die.

With Horde defeated Logan realizes that he is one with the universe and has the power of a god, however his joy is short lived as he comes to the realization that he isn't a god and doesn't deserve the power endowed to him and that as long as the crystal exists, it will always be a threat. Logan then uses his claws to destroy it causing the palace to explode as well. The X-Men, Captain Britain and Meggan all find themselves restored and back at the X-Mansion alive and well. Happy to be back, the X-Men go to check on Wolverine and find him in his room bowing over his picture of Mariko. Storm tells the curious Longshot that Logan is standing guard over their bodies. That night, Storm spends the somber evening staring out at the stars.

While back in the dimension where the ruins of the Citadel of Light and Shadow, the citadel rebuilds itself and waits for those who come to seek the coveted prize within, and test to see if they, like the X-Men are worthy. The X-Men scored a victory for the human race, for those who failed to pass would have their races genetically frozen and unable to evolve for the rest of their natural existence.

Retrieved from "https://heykidscomics.fandom.com/wiki/Uncanny_X-Men_Annual_Vol_1_1987?oldid=1462941"
Community content is available under CC-BY-SA unless otherwise noted.