Start a Wiki
Part of the 'Evolutionary War' event 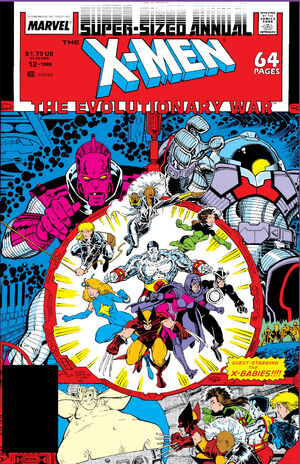 You thought me slain, fools -- now learn to your peril how wrong you were!

Having detected an attack on the very Earth itself, Storm flies away from the X-Men's headquarters in Australia, almost pulling Longshot into the sky in the tail-wind, if not for the fast thinking of Dazzler who saves his life. Rogue shoots off after Storm to follow her while Madelyne and the other X-Men track her with their bases equipment. Pinpointing Storm's trajectory to Antarctica, Logan realizes that Storm is heading toward the Savage Land. In order to meet Storm there, Logan and the other X-Men gear up and have Gateway teleport them there.

Upon their arrival, the X-Men are shocked to see that the Savage Land has been decimated and is nothing more than a barren frozen wasteland[1]. Finding a bone, Logan has Longshot use his psychometric powers to learn what happened and he relates a story how an alien creature known as Terminus was responsible for the land's destruction that seemingly killed everyone in the area. Hearing this, Colossus becomes upset that a woman -- member of the Fall People -- whom he first made love to when the X-Men first traveled to the Savage Land[2] might be dead. When Psylocke begins scanning for signs of life, the X-Men are suddenly shaken by a sudden earthquake.

Elsewhere in this frozen wasteland is the High Evolutionary, whom has come across a sample of Sarcodes Sanguinea, proving his theory that the former Savage Land is not truly baron and that life can once more thrive here. He is suddenly attacked by what appears to be Terminus, who bursts from the ground and grabs the High Evolutionary in his massive hand. Seeing "Terminus" rise from the ground, the X-Men come to the High Evolutionary's aid however none of their attacks have any effect on the creature -- except for Wolverine's Adamantium claws, however they provide little damage and the armors repair systems instantly fixes the damage done. Storm and Rogue arrives, Storm realizes that "Terminus" is the reason she was drawn to the Savage Land and unleashes the full fury of the windows to knock him into the side of a mountain, burying him in rubble while Rogue rescues Wolverine, Longshot and the High Evolutionary from the giant alien.

Back out in the wasteland, Dazzler realizes that Longshot is missing and decides to go looking for him, with Wolverine (weary of Dazzler's love-sick nature regarding Longshot) tags along while Storm, Rogue, Colossus, and Psylocke go to keep an eye on Terminus. When Logan's tracking of Longshot's sense leads him through the invisible portal, Dazzler screams when she witnesses Logan suddenly disappear. While not far away, Storm notices that her Cameo crystal is glowing and races back to find Dazzler, ordering Rogue and Psylocke to stay and keep an eye on Terminus. When Colossus and Storm catch up to Dazzler, Storm raises her Cameo crystal and a portal suddenly opens and the massive form of the Warhound C'Jime emerges from the portal. Before Colossus can attack, Storm explains that she met this creature during their first visit to the Savage Land[3]. The X-Men are surprised that a number of beings from the Savage Land survived, rescued by Storm's friend M'Rin and brought to her dimension.

Colossus is happy to be reunited with Nereel, whom also survived. She has a son named Peter, however she asks Longshot not to reveal that Colossus is the boys son. Just then, Terminus revives, and as Rogue attempts to pull Psylocke away, they are knocked out of the sky. With Storm staggering their foe with a lightning bolt, everyone gets into C'Jime's back and the giant beast attacks Terminus with it's advanced weapons, however they have no effect on Terminus. During the course of the battle, Havok and the High Evolutionary return with a plan. Quickly implementing it, Rogue uses her powers to absorb Longshot's luck powers.

With them, Rogue flies toward Terminus's mask, smashing through it -- revealing their enemy not to be Terminus at all, but Garrok hooked up to the machine. Under the machines influence, Garrok attempts to attack Rogue, however she begins absorbing his powers as well weakening him to the point where he pulls away from the devices controlling the massive suit of armor. Without Garrok powering the giant suit, the X-Men are then easily able to smash it into a flaming pile of rubble while Rogue and Garrok are rescued by Storm and Colossus.

Free from the machines influence, Garrok is shocked to see what has happened to his land, and agrees to help the High Evolutionary restore the Savage Land. When Colossus asks Nereel about her son's father, she doesn't tell him the truth, telling him that the man is gone and she will raise the boy on her own. Soon at the High Evolutionary's citadel, it is determined that Garrok would have to sacrifice his life in order to restore the Savage Land to it's glory. Garrok, having cheated death many times and having enough love for his land to sacrifice his life for it agrees to do so. As the X-Men oversee the operation, the Savage Land Mutates (led by Zaladane) watch eagerly, seeing this as playing into their hands and the first step to their goal of conquering the world. The High Evolutionary is aware of this and he secretly plots to foil this plan and activates the device that converts Garrok into pure energy that restores the Savage Land to it's glory -- restoring the vast tropical forest and it's prehistoric wild life.

The X-Men then help the survivors of the Savage Land rebuild before leaving, however Storm orders Psylocke to alter their memories so that do not fully remember who helped them. Some time later after the X-Men have left, Ka-Zar and his family returns to the Savage Land and is surprised to see that the survivors have formed together as the United Tribes and have created a banner given to them by their saviors. When Ka-Zar and Shanna ask who helped them, all Nereel can tell them that their saviors were merely legends.


Appearing in "I Want My X-Men!"Edit

Synopsis for "I Want My X-Men!"Edit

In the Mojoverse, Mojo is furious that in order to stop the Adversary, the X-Men sacrificed their lives[4] cutting off any future records of their exploits ruining his ratings. With the danger of dropping out of the number one spot he makes demands to his writers, the head writer balks and has his head turned into that of a child by Mojo.

His prisoner, Ricochet Rita tells Mojo that it would be simpler to just find replacements for the X-Men. Finding this idea brilliant, Mojo orders his Warwolves be pulled in for the job, however he learns that they are still on a mission to recapture Phoenix[5]. He then latches Rita to his ship to pilot the Wildways to find suitable replacements. Rita is up for the challenge, telling Mojo that she survived the trip before[6][7].

Doing a casting call, Mojo rejects every alternate version of the X-Men from an all female version, all robot, kinky, and animal X-Men. When the final pull is a new incarnation of X-Babies based on Rogue, Wolverine, Havok, Storm, Dazzler, Longshot, Colossus, and Psylocke, Mojo is instantly angered. Horrified at a lil' Longshot, Mojo uses his powers to turn Lil' Longshot into a photograph leading to a battle between Mojo's forces and the X-Babies. As Mojo unleashes his Trademark Police on them, the X-Babies pound them while Sugah and Lil' Dazzler fight over the Longshot photograph. Wolvie and and Psychild free Rita and when Mojo surrounds them all, Major Domo informs his master that X-Babies are an instant hit.

Realizing the marketing potential of these cute little X-Men, Mojo accepts them with open arms although Wolvie takes the opportunity to poke the ruler of Mojoworld in the rear with his claws. With the X-Babies Mojo's new sensational stars, Rita wonders if she will end up regretting this.

Retrieved from "https://heykidscomics.fandom.com/wiki/Uncanny_X-Men_Annual_Vol_1_1988?oldid=1462943"
Community content is available under CC-BY-SA unless otherwise noted.