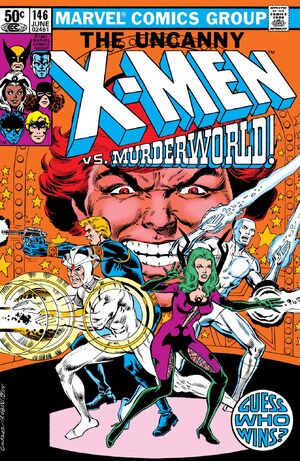 The Doctor Doom in this issue is later revealed to be a Doombot [2], and is destroyed by the real Doom for suffering the indignity Arcade to strike a match on his armour and get away with it.

The concept of turning the Doom character from this issue into a Doombot was done by writer Chris Claremont's former co-creator John Byrne. Editor in Chief Jim Shooter noted that Claremont was not consulted and did not approve of this later revelation.

Retrieved from "https://heykidscomics.fandom.com/wiki/Uncanny_X-Men_Vol_1_146?oldid=1628933"
Community content is available under CC-BY-SA unless otherwise noted.