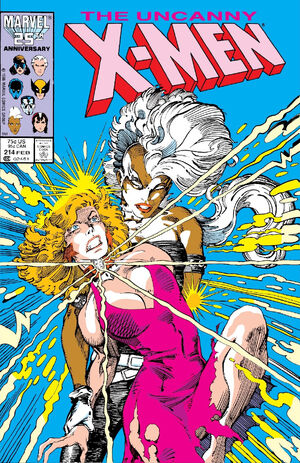 Appearing in "With Malice Toward All"Edit

Synopsis for "With Malice Toward All"Edit

As Lila Cheney and her band perform another sold out performance, Dazzler -- working in secret as her keyboard player after being outed as a mutant -- struggles to keep the Marauder Malice from keeping her under control. Unfortunately, despite her struggles, Dazzler is influenced into using her powers on stage and stealing the show. After the show, Lila confronts Dazzler and warns her against using her powers during a performance again because not only will she be fired, she might blow her cover by revealing that she's really Dazzler. Alison wonders if Lila is perhaps jealous of her superior musical skills, and warns Lila to enjoy her fame while it lasts as she intends to take her spot at the top of the charts.

Later, at Professor Xavier's School For Gifted Youngsters, Storm, Rogue, and Psylocke are working at repairing Cerebro following the damage done to it by Sabretooth[1]. Although Psylocke is hard on herself, Storm and Rogue try to convince her that it was an early mistake and she'll be better prepared next time. When Betsy asks if they will be ready should the Marauders attack the school again, Storm doesn't believe so. With that Rogue departs to get some fresh air. When Storm asks Betsy where Wolverine and Callisto are, Psylocke tells her that they are in a training session. When attempting a psi-link to contact Wolverine, Betsy is shocked to see that Wolverine and Callisto are really fighting. When she suggests doing something, Storm tells her that there is no danger.

Their session ends with Callisto just barely managing a kill shot, and she tells Logan that she intends to go looking for the Marauders and avenge those they killed to pay the debt to the survivors. Later after cleaning up, Logan checks on the status of Cerebro and when he notices Betsy is on edge tries to spook her with his claws. He gets a full on telepathic jolt for his trouble. When Betsy scolds him, he tells her that he was only checking to see that she hadn't lost her edge after battling Sabretooth. When Betsy convinces him that she can handle herself the phone rings. Answering it, Logan learns that it is Lila who has come to report about Dazzler's recent troubles.

Wolverine, Storm, Rogue and Psylocke all travel down to Dallas and the following night they find Dazzler performing at a private club. They notice that everyone in the club is on edge and could possibly explode at any moment. While the X-Men agree that Dazzler is an adult who can take care of herself, they believe that they should warn her about the Marauders and the possibility that they are targeting those associated with the X-Men. To their surprise, Dazzler notices them and attacks, finally glad that they decided to show up. A battle erupts between the four X-Men and Dazzler, unaware that she has been possessed by the Marauder known as Malice.

When they manage to over power Dazzler and restrain her, Malice leaves her body and takes possession of Wolverine. Not realizing what's going on, the X-Men are taken off guard as the Malice possessed Wolverine attempts to murder Dazzler. However she knocks him out with a laser blasts fired from her eyes. While outside, the battle has attracted the attention of the police SWAT team to the location. With the owner telling the officer in charge that the Dazzler is in his club wrecking the place, the officer wonders if the story is true, or if it's the product of the drugs that he is clearly high from. Back inside, Rogue is possessed by Malice next who quickly departs to the outside to greet the authorities outside. Still not realizing what's going on, Storm wonders if Dazzler's "madness" is infectious. Betsy scans Dazzler's mind and realizes the truth, that Rogue and the others were possessed by the Marauder known as Malice. The team quickly comes up with a solution to defeating Malice: Unable to effect Malice in Rogue's mind, which is psi-resistant, Psylocke believes that she can defeat Malice if she possesses someone who she has a psi-link with. Although Dazzler offers herself up, Psylocke instead decides to use Storm as bait. Storm accepts, and Wolverine tells her not to worry, that if Psylock's plan fails, he'll finish Malice one way or the other.

Outside the Malice possessed Rogue makes short work of the SWAT team outside, and tells the media that she is with the X-Men. Before she can damage the groups reputation further, Dazzler attacks, prompting Psylocke to attack her with a powerful psi-bolt. This attack causes Malice to flee Rogue's body, and take possession of Storm as planned. However, Malice finds that Storm is not as easy to possess as the others. Through force of will, she manages to pull off the choker that is Malice when she possesses others. Telling the villain that her defeat comes at attempting to take control of others dark natures, an aspect of herself that Storm had long ago come to accept. In the aftermath of the battle, Malice seemingly dissipates.

With the battle over, the X-Men and Dazzler sneak out of the private club and witness the police efforts outside. Dazzler asks Storm why the Marauders would go after her. Storm suggests that her powers and association as a friend of the X-Men likely made her a target. Dazzler feels horrible due to the fact that her possession led to the X-Men being discredited and blamed for the damage caused, Storm assures her the X-Men will endure. Storm invites Dazzler to join the X-Men for her own protection, which she accepts. Suddenly, Logan lashes out and attempts to kill Storm, thinking that she is still possessed by Malice. When the others pull Logan off of her, he finds that he was mistaken but could have sworn that he got a whif of Malices scent. Psylocke puts her teammates at ease telling them that she does not detect Malice's presence in any of them, however the group is still uneasy with the experience. Wolverine suggests that if they cannot trust each other the X-Men should split up, but Storm refuses to give up without a fight.

High above them, Malice, having possessed the leader of the SWAT team watches over the group. She muses how Storm's words are brave, finding Wolverine's words truer. Reveling in the fact that her influence has breached the trust the X-Men once had in themselves and that it may be the key to their eventual destruction.

Retrieved from "https://heykidscomics.fandom.com/wiki/Uncanny_X-Men_Vol_1_214?oldid=1572088"
Community content is available under CC-BY-SA unless otherwise noted.