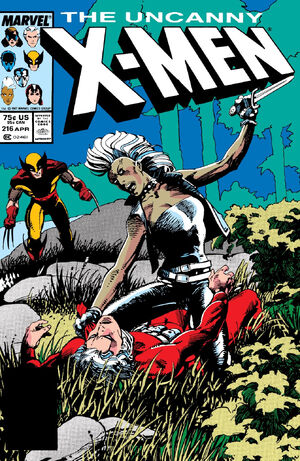 We are both damaged goods -- that is part of what makes us... human.

-- Storm, while talking to Wolverine

Wolverine's senses have been shaken when he picked up the scent of Jean Grey at the ruins of her sister Sarah's home and is now running through the woods clinging to what is left of his humanity. That night he comes into the path of a young couple driving through the mountains and is struck by the car. Slashing it with his claws, Logan runs into the wilderness leaving the couple to wonder what they hit, and stranding them until they can make repairs to their vehicle. As Wolverine continues to run through the woods he struggles to maintain his humanity and in his frustration lets out a howl of utter anguish.

This is heard by Storm, who many miles away, is still fleeing from the old World War II heroes Crimson Commando, Super Saber, and Stonewall. Running for her life along with young drug dealer Priscilla Morrison. Storm has set up a trap for Super Saber with a spool of fishing line she managed to find. Setting a snare across the dirt road, the two hide out in the bush to wait for the super-fast hero to run by so that Storm can decapitate him as he passes. However, after she shows the trap to Priscilla, Storm notes the young girls remorselessness and realizes that what she is doing is more along the line of Wolverine's tactics than her own and wonders if she can bring herself to go that far and slay another human being for her own survival.

When dawn comes, Storm is about to pull the line up as Super Saber runs past their trap, but she loses her nerve and decides against hit. When Priscilla attempts to protest, Storm stifles her until Super Saber is out of the way. When the young girl demands to know why Storm didn't kill, Storm tells her that it's not necessary and tells the young girl that she will see her through safe and heads them toward a nearby mountain top.

Three days ago on Muir Island, Moira Mactaggart is rudely awoken by the arrival of the other X-Men, sent to Muir with their injured comrades by Storm and Wolverine. Fearing the Marauders might be waiting to ambush them, Psylocke psi-probes the island and learns that the island is safe, however some of the Morlocks they brought here have died since and one of them barely hangs onto life and is unlikely to survive the day. When they land, Moira is furious and demands to know what is going on. The X-Men explain that they were sent to Muir and they are upset and confused about what to do without their leaders, as they guide and teach them yet as Storm and Logan are alone, and nobody knows where they went they fear that they cannot be helped if they hit trouble.

Back in the States, Crimson Commando and Stonewall continue their hunt of Storm and Priscilla and come across her trap. When they marvel at the ingenuity, they wonder why Storm did not kill Super Saber when she had the chance. When Stonewall suggests they should just let Storm go, the Commando reminds him that if the authorities arrest them they cannot continue their mission to wipe out the criminal scum that are above the law. When Saber is running back while Storm's trap is still up, the Commando has Stonewall stop him before he accidentally decapitates himself and the Commando sends the shaken Saber up to the top of the mountain to try and find the two women.

Not finding them and making it to the top of the mountain, Saber believes that he beat Storm to the top but is surprised when she ambushes him. Priscella, wanting vengeance and no longer wanting Storm's protection tries to kill them both by pushing a large rock on the two of them causing an avalanche. Storm pulls Saber down part of the mountain hoping to get some clearance, however Saber cannot get enough traction to get them away at super-speed and both are buried under a pile of boulders.

While on the roadside, the young couple repair their vehicle as Wolverine watches and tries to make sense of the situation. Suddenly Priscilla rushes out of the bush and manages to pull the woman's gun out from her and shoot them both in cold blood. All Wolverine can do is watch in shock as the young girl hops into the vehicle and drives away. The senseless slaughter of the young couple snaps Logan out of his state and he wonders what possessed him to stand by and let them be killed. While not far away, Crimson Commando and Stonewall come across the rubble of the battle and finds no sign of Super Saber or Storm, only Saber's aviation goggles and Storm's vest. While not to far from there, Priscilla's escape vehicle has run into a muck hole and the young girl is now in a panic. As she tries to remain alert and ready to shoot anyone who comes her way she is attacked from behind by someone who knocks her out.

When Stonewall arrives shortly after he heads toward the girl when he is suddenly ambushed by Storm who knocks him into what she thinks is normal water. However, when Stonewall pleads for help, telling her it's quicksand, Storm just barely manages to pull the man out of the muck, saving his life. By this time Priscilla has recovered and attempts to bash their heads in with a rock when she is struck by a dagger thrown by the Commando, killing her. Before the Crimson Commando can slay Storm, Wolverine arrives and deflects a tossed dagger. Storm also recovers and dodges another one tossed by the Commando.

The next day, Storm and Logan watch the media circus that has formed at the state police dispatch following the three heroes surrender to the authorities. Storm and Wolverine talk about Storm's sudden willingness to kill the Commando if required. Storm tells Logan that while the X-Men should still strive to make a world where humans and mutants live in peace, they cannot afford to be passive anymore and allowing their enemies to strike first. In this new world where they are hunted like outlaws the X-Men are going to have to be willing to strike out at their enemies first, and if needed -- kill. Coming to this realization, Storm wonders if her assertion the previous night that she was better than the Crimson Commando will have any merit anymore once she crosses that line.

Retrieved from "https://heykidscomics.fandom.com/wiki/Uncanny_X-Men_Vol_1_216?oldid=1492556"
Community content is available under CC-BY-SA unless otherwise noted.