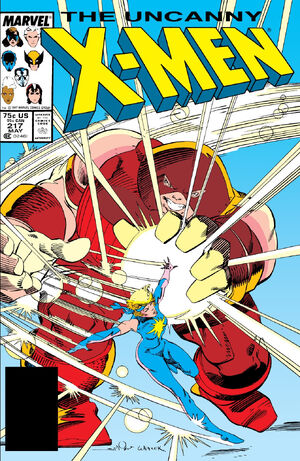 Muir Island: The X-Men are in the middle of a training exercise to hone their powers. Although they are required to keep a low profile, Dazzler blatantly ignores this letting loose with her light powers. This attracts the attention of a nearby ship that is passing by. The captain of the ship tells his crew to ignore it, as strange things happen on Muir Island all the time. However, one of the crew -- a man named Wullis -- is interested in the goings on that are happening on the island as he is secretly an argent of Dr. Doom.[1] The goal of the training session is for the other X-Men to capture Psylocke. While they try their best, the telepath manages to knock out Rogue, and take control of Dazzler and use her to try and take out Longshot. However, Longshot's luck plays out for him as he manages to snare up both Dazzler and Psylocke long enough for Rogue to recover and grab Psylocke and make her surrender. Their session is called off by former X-Man Sean Cassidy, who tells the X-Men to return to the facility for breakfast and a report on how well they did.

As they sit down for breakfast, the X-Men learn that Wolverine and Storm had a strap in upstate New York but are okay and will call for them when needed. This upsets them as they should be a team, however Sean reminds them that Storm and Logan sent them to Muir to seek training from him in the meantime. As Sean points out the flaws of their strategy, the X-Men learn that in this business they have to stop relying entirely on their individual powers and focus on working as a team. Rogue takes it the hardest, knowing that she screwed up however they all accept his advice.

Elsewhere on the compound, Moira reports to Callisto about the status of the Morlocks who are still healing following their encounter with the Marauders. She reports that there were no deaths in the night, but there are still a number that are on the critical list. Callisto tells them it's better that they should die as their spirits are dead. Moira worries about how Logan and Storm are enduring and wonders how the X-Men will cope if their leaders cannot pull it together. Callisto offers a fatal response: they won't.

Later as the X-Men are training alongside Callisto, Callisto begins poking at Dazzler. Calling her on her looks and telling her that she won't get by on those alone. This leads to a brief scuffle which Dazzler manages to fight off Callisto. Angered by Dazzler storms out with Callisto warning her that running will serve her nothing, she should learn to fight or die. Dazzler walks to the shore of the island, trying to come to terms with the life she has walked into since joining with the X-Men. She is upset because she knows that she is not a fighter, she's been a musician all her life and misses the life it used to bring. She hates her situation an decides to run away, hopping onto a motorboat she begins to ride out to the mainland. Along the way, she is met by Rogue who thought to bring her a jacket, telling her it's her choice if she decides to stay on with the X-Men or not before departing.

Later, Dazzler happens upon a Scottish pub called Black Ned's. Inside she is taken away by the sites and that atmosphere of the small place as it reminds her of the early days of her career. Partaking in song and dance, Dazzler has a good night and at the end of the evening she is about to depart when she spots Cain Marko speeding by in a car. Recognizing him as the X-Men's old foe the Juggernaut, Dazzler wonders what he is up to and, taking a motorcycle, speeds off after him.

The Juggernaut realizes that he's being followed and stops, changing into his costume to see who is foolish enough to do so. Dazzler doesn't stop fast enough and ends up slamming into the side of Cain's car. Furious, Cain tosses her bike away, and is about to attack when he realizes who she is. Juggernaut admits that he is a big fan of her music and promises to make up damaging her bike once he's finished his current job. Dazzler attacks him instead leading to a battle between the two. Despite the Juggernaut's superior strength, the crook doesn't wish to harm her too badly.

Dazzler however, wishing to prove herself, unleashes her full power on him until she finally collapses. The Juggernaut is impressed by her show of power, but remarks how it's futile to try and stop him as he is unstoppable. However, before Juggernaut can act, Dazzler collapses suddenly. Inspecting her body, the Juggernaut is horrified when he believes that Dazzler is dead.

Retrieved from "https://heykidscomics.fandom.com/wiki/Uncanny_X-Men_Vol_1_217?oldid=1512471"
Community content is available under CC-BY-SA unless otherwise noted.