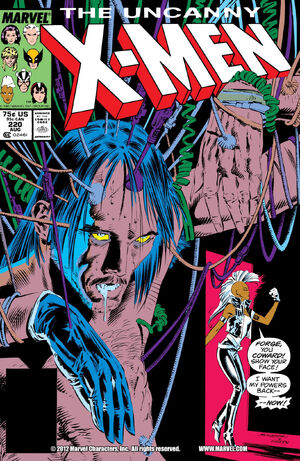 I saved your life, wind-rider, remember?! Now, I'm calling in that debt!

A vision: a beautiful blue-eyed hawk with a white plume of feathers finds its perfect mate in the mountains. The two lock in love and pull away in joy before hitting the ground. However, the female hawk's joy is soon ended when her lover becomes a metal mockery of the beauty it once held and attacks her, and cripples her sending her falling to the ground to die.

In the mountains, Wolverine has come to find solitude in the seclusion, having come to doubt his own senses. When Storm manages to track him down, he demands to know what she wants. She tells him that she is going to go back to Forge and demand that he restore her lost powers[1], telling him that she is more use to the X-Men now if her mutant abilities were restored. In her absence, she wants him to lead the X-Men. Logan tells her that he doesn't have it in him and suggests one of the other X-Men. She tells him the fact that she is here with him must tell her opinion of choosing one of the others, and Logan decides to agree with her wishes -- for better or for worse.

Four days later, Storm finds herself standing in the pouring rain outside Eagle Plaza in Dallas Texas. The scene reminds her so much of when she first left[2]. Going inside however she is surprised to find the power out and the security down and the building utterly deserted. Searching the security desk she finds a condemnation notice and the phone dead. Unable to walk away without satisfying her curiosity about the state of the place, Storm begins travelling the stairs to the penthouse where Forge used to live. High above, the strange being posing as Forge's old shaman Naze detects Storm's presence in the building, having known she would come. He begins preparing his welcome for her.

Reaching Forge's "Eagle's Nest" she finds the shattered window from her last encounter here has not been repaired[3] and the place is also deserted. Hearing a voice outside, she goes out and finds that it's nothing more than a holographic recreation of her confrontation with Forge when she learned that he invented the weapon that stole her powers[4]. Returning back into the Eagle's Nest she is shocked when the holographic simulators recreate another scene from Vietnam. However this time Storm is surprised to see demons in this simulation and wonders if she can remember seeing them the last time she saw this simulation or if they are a new addition. Suddenly the simulation disappears and the platforms turn invisible. The security system is activated and using her keen memory to remember where the various platforms where located, Storm manages to slip away momentarily. As she is distracted by recreations of the events surrounding her recent de-powering she is suddenly struck by a stun beam, but manages to slip into the safety of the kitchen.

There, she is presented with another recreation of the night she and Forge shared a romantic dinner[4] and notes that the kitchen is a complete mess. Continuing on through the house, she finds more of these recreations as well as images of her in all her incarnations with the X-Men and a mishmash of reality and Forge's deepest fantasies of her. Disgusted by this display, Storm turns off the projection and is startled by someone's scream. Turning she sees what she believes is Forge, hooked into a large machine, however when she approaches him she finds that he is yet another hologram. It is then that she is confronted by "Naze". The old shaman tells Storm that Forge turned his back on the Cheyenne people and his duty to battle the Adversary, an ancient evil that plots to take over universe and fill it with utter chaos. However, Naze intends to stop the Adversary and has been waiting for Storm to come so that he might recruit her to his cause.

Storm is hostile at first and does not wish to save Forge's life or get involved in his madness, however Naze does not let up. When she asks about the holograms and defenses, Naze tells her that it was all his doing, as he wanted to be sure she still had fight in her. Continuing to refuse Naze she rushes outside into the storm which buffets her and tries to force her back inside. However as she resists the storm suddenly stops. Finally Naze manages to convince her to join him on his quest to save, or destroy Forge -- whom he claims is under the Adversary's thrall. When Storm agrees to follow him until the end, he tells her that she made the right choice and Forge does not stand a chance. As Storm walks away, Naze puts on a sinister grin.

Retrieved from "https://heykidscomics.fandom.com/wiki/Uncanny_X-Men_Vol_1_220?oldid=1403744"
Community content is available under CC-BY-SA unless otherwise noted.