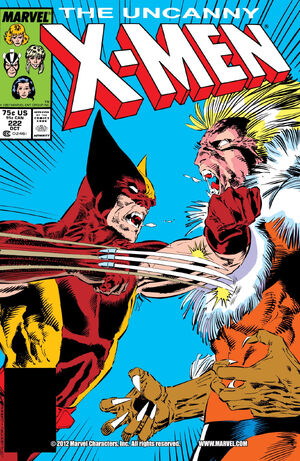 -- Polaris, while possessed by Malice

While coming to the rescue of Madelyne Pryor in San Francisco, the X-Men have been ambushed by the Marauders who are seeking to kill Madelyne. During the course of the battle, Rogue and Dazzler have been dumped into San Francisco Bay where they are confronted by the Marauders leader, Polaris -- whom they do not know has been possessed by Malice. Before she can attack the two she is blasted from behind by Havok. Rogue recovers her body and flies it back to shore, wondering what Havok will think when he finds out his girlfriend is a member of their worst enemies. However, Rogue is still weak after Dazzler saved her from the bottom of the bay and the best she can do is skip across the water crashing all three women on the beach.

Meanwhile, Havok and Psylocke have been picked up by the X-Men's ally SFPD detective Bree Morrell, who the two new X-Men thank for assisting in their battle with the Marauders. When Bree wants to know why the Marauders want to kill Madelyne, Psylocke doesn't know and telepathically contacts Rogue to find out. Rogue tells Psylocke that she has one of the Marauders prisoner and leaves Dazzler with Polaris while she goes to look for Madelyne in the Bay. Dazzler deciding to not be caught off guard uses her powers to absorb all the sound in the area to convert into light, and leeches out all the sound, causing a panic on the beech until Havok and Psylocke arrive to stop her. When Alex turns over the Marauder to see who it is, he is shocked to see that it's Lorna. Polaris has revive by this point and blasts Havok with her magnetic powers.

Meanwhile, in the Rockies, Storm and Naze continue their trek to find Forge, whom Naze says has been manipulated into working for the Adversary an ancient god that seeks to unleash chaos throughout the universe. As they take a pause on their vision quest to camp for the night and cook a meal they are interrupted by a woman who come running for her life. When Storm tries to bring her close to the fire, the woman is hesitant and when she asks who is after her they get their answer in the form of a large boulder being hurled at them. While Storm is distracted, the woman suddenly grabs her and lifts her off her feat, and tosses Storm away. As Storm rolls with the throw to avoid injury, she is told that the "attacker" is her brother. Storm meets the "woman's" "brother" who manifests the ability to fire black lightning bolts from his eyes, which Ororo barely manages to dodge. The woman meanwhile has grabbed Naze and began draining his life force. However, deducing the woman's weakness Storm pushes her into the fire, forcing the creature to reveal it's true form: The owl headed reptilian form of one of the demonic Eye Killers. With an assist from Naze, Storm manages to force the two into their fire until the two Eye Killers are engulfed with flames and killed. Although they are victorious, both are injured and have the Eye Killer's poison running in their veins. Gathering up and leaving camp, Naze tells her that the gates that keep these demons off Earth is wearing thing and when Storm considers the idea that Forge might be responsible tells Naze that she will do whatever it takes to stop him, a response that pleases the old shaman.

Back in San Francisco, Havok is taken off guard by being attacked by his lover. When Psylocke scans Lorna's mind she learns that she has been possessed by Malice allowing Lorna to be temporarily free. This momentary freedom ends when Alex, Alison and Betsy are attacked by Harpoon and Vertigo, allowing Malice to reassert control. A brief battle breaks out between the three X-Men and three Marauders until Arclight arrives to shake things up a little, causing the beach to sink in. As Polaris attempts to escape, Alex jumps up and grabs her leg, refusing to let her go begging her to fight Malice's control. While out on the Bay, Rogue continues her search for Madelyne unaware that Scalphunter his hiding out on the Golden Gate Bridge and has her lined in his sights. His shot is ruined by the arrival of Longshot and Wolverine. When Scalphunter fires at both of them, Longshot drops down to the water below, leaving Wolverine alone. Wolverine believes he is more than a match for Scalphunter, however Scrambler gets the drop on him and nullifies his healing factor and enhanced senses. Sabretooth takes this moment to dive into the fight, however he does not account for Wolverine's Adamantium laced bones and claws, and Logan makes short work of him by impaling him through the heart and tossing him at his fellow Marauders. When Scalphunter begins firing again, Logan jumps off the bridge on a hunch and is right when Rogue manages to rescue him before he hits the water.

The Marauders, deciding that Madelyne must be dead consider their mission accomplished and retreat, so when Rogue and Logan get back on the bridge they are nowhere to be found. Rushing back down to the water to see if Longshot is okay, Logan is surprised to see that Longshot's luck power not only saved him, but also allowed him to find and rescue Madelyne as well. While over Alcatraz, Havok continues to try and convince Lorna to fight Malices control when she sees the signal from Scalphunter. She kicks him loose, however uses her magnetic powers to allow him a safe landing on the ground, finding his continued living with the fact his lover is enslaved by the enemy to torment him. As she flees she goads him into firing at her, telling him that if he lets her go he will be partially responsible for anyone whom she might kill in the future. Realizing that she is right, Alex unleashes the best plasma blast he can muster, however Polaris manages to block it, mocking him as she flees the scene.

Retrieved from "https://heykidscomics.fandom.com/wiki/Uncanny_X-Men_Vol_1_222?oldid=1516119"
Community content is available under CC-BY-SA unless otherwise noted.