Start a Wiki
Part of the 'Fall of the Mutants' event 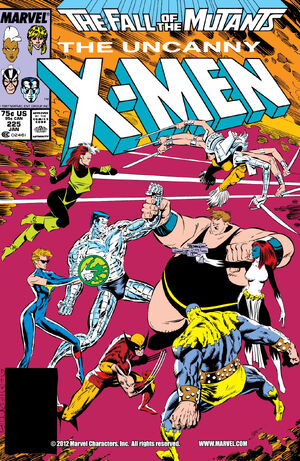 Order has had its day, Roma. This epoch belongs to chaos!

Edinburgh, Scotland: Colossus has mostly recovered from his injuries battling the Marauders and has taken the time to come to the village where the X-Men most recently fought the Juggernaut[1] to relax and spend some time sketching. When his art work attracts the attention of some children they begin play acting in front of him. When they asks why he is sweating he tells them that he hasn't fully recovered from his injuries. When the children complain about the X-Men being mostly girls now, Peter draws a picture of his Colossus form which impresses the children until one named Lewis makes fun of them. Saying the X-Men are just muties and that X-Factor are the real heroes. When a fight almost breaks out, Piotr breaks it up and tells the children that they should live peacefully, however half their number are not sold after the damage done by the X-Men's battle previously that year.

When the children are gone, Peter is visited by a young woman who asks to commission a sketch of herself in exchange for reading his fortune. Peter is more than happy to oblige and she tells him that he is a being of courage and that he has a choice to make soon and that the fate of everything will depend on it. Surprised by these words Peter demands some answers and is shocked to find the woman is no longer there and in her place a statue of himself in his Colossus form. When he looks at the sketch of the girl she looks radically different on paper than she did in person. As Peter's thoughts are distracted when some of the children try to startle him with a firecracker. It succeeds, and he loses control of his concentration, transforming to his organic steel form. Seeing one of the boys who idolized the X-Men earlier visibly frightened by Colossus, he tries to appeal to the boy that he is no monster. However when he sees that when confronted with a mutant in real life the boy is scared, Colossus decides to leave the scene.

Meanwhile, in a place beyond the reaches of existance -- the Adversary (the being who has for months been waring the form of Naze, Forge's teacher) appears in the court of the omniversal guardian Roma, whom now is trapped now that the Adversary is free to do as he pleases. He gloats over how he has removed both Storm and Forge from the battle and thus insure his victory and that the universe will soon be destroyed by total chaos. Roma, the woman who had visited Colossus earlier smiles to herself, hoping that the events she has put in motion will be the final jest on the Adversary.

Back in Scotland, among the ruins of the X-Men's battle with the Juggernaut, Colossus finds a "wanted" poster of the X-Men put up by a group called the Human Rights League. Seeing how despite the fact the X-Men have saved the world countless times they are still hounded he lets his anger get the better of him, smashing the delapitated wall the poster hangs on demanding to know why people still fear them. When considering the sacrifices he himself made, he recalls the injuries he sustained protecting the Morlocks. Realizing he is still in his organic metal form he tries to change back to flesh and blood and despite his effort he finds that he is trapped in his alternate form. Looking at the statue of himself, he recalls how life was so simple when he first joined the X-Men, but now everyone even other super-heroes look at them with mistrust. Deciding that he must still fight to make the world a better place he goes to a payphone and accidentally wrecks it's booth while trying to squeeze in. He places a call to Xavier's school in the United States and asks to speak to his sister. Happy to hear from her brother, Illyana telelports to his location. She tells him that she is glad to see he's recovered but can't stay long as the New Mutants are going on a mission[2] and asks how she can help. Peter tells his sister that he would like to be reunited with his fellow X-Men, a request his sister is more than happy to comply with, and teleports the two of them away.

The X-Men are in Dallas, Texas, to determine why Destiny's visions of their future are of their deaths in this city. They first decide to check out Eagle Plaza, the former home of Forge. After Rogue does a flyby and reports to Wolverine that the place looks deserted, Logan decides to go inside and investigate. As soon as he does, the security systems go off and begin firing lasers at him, mowing him down. The other X-Men come to his rescue, with Longshot going to recover Logan, but his luck powers don't make him totally immune as one of the lasers strikes him before Havok blasts the cannons away and Rogue pulls her two teammates out of the room before debris can fall on them.

Flying them back outside, Rogue flies directly into Stonewall and bounces back, and the X-Men soon find that the Freedom Force are now before them. The Blob is quickly launched in the air by Avalanche and he lands on the incapacitated Wolverine to take him out of the fight. When Longshot sees Spiral among their number, he finds the woman familiar but can't remember from where -- this vague recollection troubles Spiral. Mystique orders the X-Men to stand down and be taken into custody. However Rogue refuses, even though Mystique warns her that staying in Dallas will mean her and the X-Men's death. When Havok calls Mystique on her support of the Mutant Registration Act, she defends it, but Alex isn't sold so easily by the woman who once led the Brotherhood of Evil Mutants.

When Psylocke orders Dazzler to blind them with a light blast, this surprise attack is spoiled by Destiny who warns the others and Dazzler is soon knocked out by Super Saber. This leads to a full out battle between the X-Men and Freedom Force. In the ensuing chaos, Mystique asks Destiny for guidance, however the elderly precog -- tossing off her mask -- tells her long time friend that she sees nothing but death for all those who remain here. Meanwhile, Psylocke is attempting to use her mental powers to force the Blob to move. This doesn't work and when Super Saber attempts to take her down, she redirects him into Stonewall causing him to bounce off his comrade and take out Avalanche. However she is left open for attack by the Crimson Commando who takes her down with a single blow. The Blob gloats however, this is short lived when the fat mutant is not so easily moved until Wolverine extracts his claws, poking him in the ass hard enough to make him leap into the air. As he begins to land, Colossus materializes and lands a powerful blow sending the Blob smashing into Eagle Plaza.

Mystique attempts to trick the X-Men into ceasing their battle by assuming the form of Storm, but Rogue sees through it and attempts to tackle her when they are both blasted by Spiral. The X-Men regroup and Wolverine orders that them into Eagle Plaza for cover. Destiny warns the Freedom Force to not let the X-Men do this because it will spell doom for them all, however they are too late and as the X-Men cross into the building a giant rift in the fabric of existence opens in the sky flooding downtown Dallas with light. As the Freedom Force wonder what this powerful light could be, Destiny tells them that this could be the beginning of the end for the entire world.

Retrieved from "https://heykidscomics.fandom.com/wiki/Uncanny_X-Men_Vol_1_225?oldid=1403749"
Community content is available under CC-BY-SA unless otherwise noted.