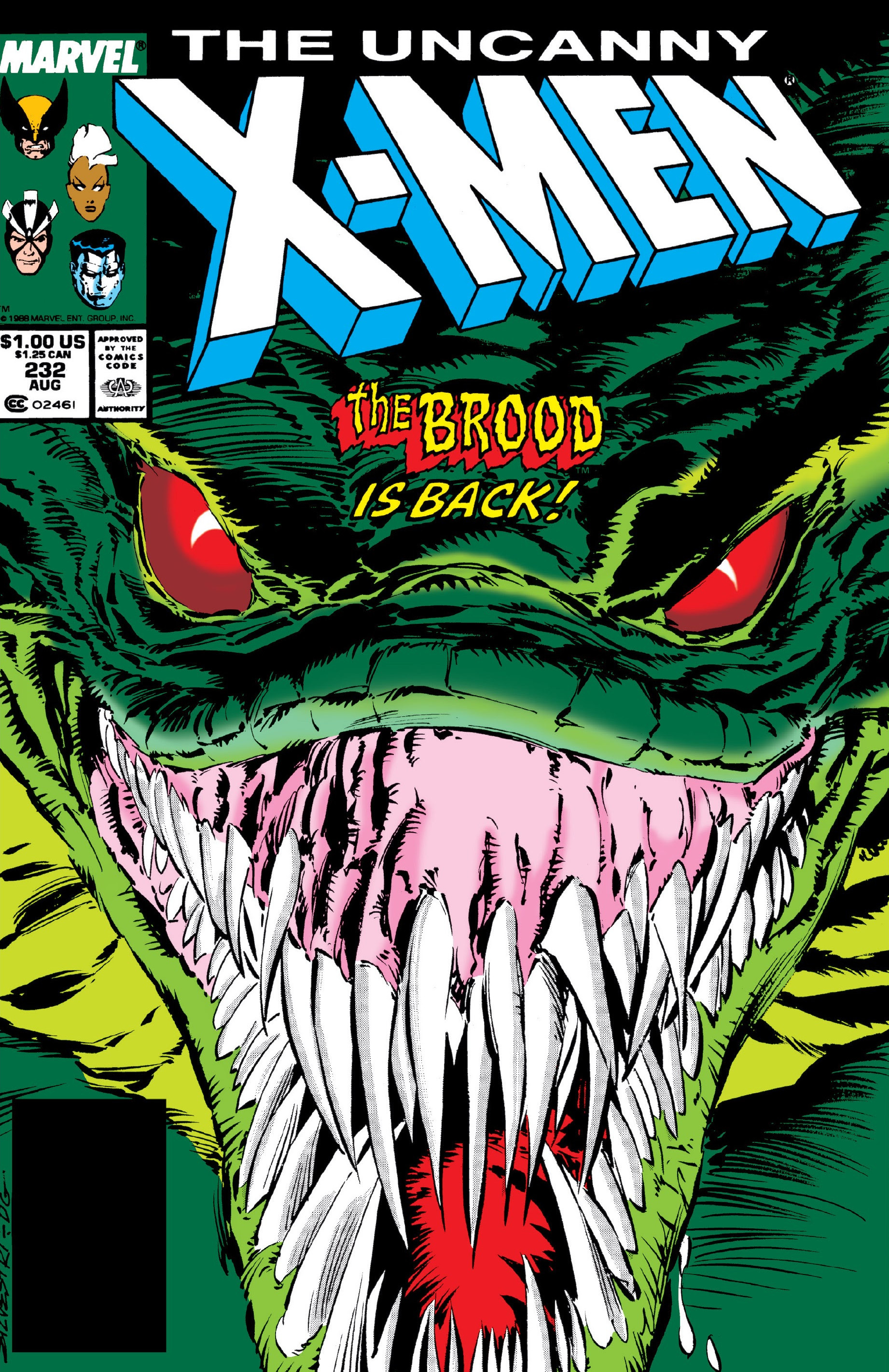 We're all of us Brood here. And soon old enemies -- very soon -- you will be too!

Not too long ago, while Storm and Wolverine were battling the Crimson Commando and Stonewall[1] and the other X-Men were battling the Juggernaut in Scotland[2] the tranquility of the Diablo Rio Mountains were interrupted when something feel from the sky and crash landed near some campers. Going to investigate, they find a Brood Starshark craft, and they are soon all slaughtered by the surviving Brood warriors inside, except for one: paramedic Harry Palmer who is infected with a Brood queen embryo.

Today: Palmer is making his usual rounds on the site of a heart attack victim who's episode was triggered by the activation of his latent mutant powers: the ability to breath fire. As Harry examines the man and when he is left alone with him, his Brood personality takes over and infects the man with a Brood embryo.

Meanwhile, in Australia, Madelyne Pryor is teleported back to the X-Men's secret outback headquarters by Gateway after a shopping trip. She finds that there is nobody around to comment on her new outfit and haircut, and is particularly disappointed to see that her brother-in-law Alex is not around either. She goes down to the monitoring equipment after finding a note from the X-Men telling her they are on a mission and begins sketching designs for a logo so that the X-Men can be remembered by their activities and fulfill Roma's request that they become legends in the minds of the human race. Her attention is turned to one of the monitors when it picks up a news feed from New York City, where she is shocked to see her husband Cyclops and Jean Grey being interviewed by reporter Trish Tilby. Coming to the conclusion that Scott left her for Jean Grey -- who is alive and well after all[3] she angrily punches the screen causing it to explode, knocking her out.

Denver: Palmer is returning to his apartment after his shift is over feeling particularly drained after the days work, and realizes that it only happens when he comes to the aid of mutants and wonders if that has anything to do with it. When he goes into his apartment he finds Psylocke and Colossus waiting for him. When the two try to warn him of the Brood embryo inside of him, Palmer surprises them with feats of super-human strength. He manages to toss Colossus through the wall of his apartment and make an escape. When he tries to make a break for his car, he is attacked by Havok, Longshot and Dazzler. When he tosses his car door at them, he misses (thanks to Longshot's luck powers) and takes down a hydro pole. While Rogue fixes the damage and eliminates the danger of the live wires, Palmer manages to escape on foot.

The X-Men regroup and with Storm creating a mist around the area, she sends Wolverine off to try and track Palmer down. Palmer meanwhile manages to board a city bus in an attempt to escape when he is attacked by Rogue. During the fight he easily over powers her and is about to infect her with a Brood embryo when Wolverine smashes the passenger window of the bus and throws him out of the bus, causing the bus to crash. While Rogue pulls herself out of the rubble, Wolverine chases Palmer to an alley that ends in a dead end. When Rogue catches up with Logan, the two have the infected man cornered when the police arrives. Detecting they too are infected by Brood, Wolverine kills the two officers. Not realizing the truth, Rogue believes Logan has gone berserk and stop him, when the other X-Men arrive and Betsy confirms Logan's actions. Just then, the X-Men soon find themselves surrounded by an army of partially transformed Brood all summoned by Palmer to kill the X-Men.

Retrieved from "https://heykidscomics.fandom.com/wiki/Uncanny_X-Men_Vol_1_232?oldid=1522255"
Community content is available under CC-BY-SA unless otherwise noted.